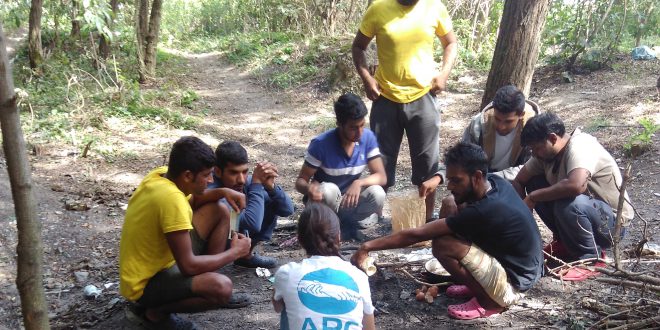 Police Transfer 100 robbed and barefoot migrants from Croatia to Serbia

Principovac, September 24th – Migrants trying to enter Croatia from Serbia are exposed to the maltreatment and violence of Croatian policemen. Our team that regularly visits camps on our northern border and confronts people who are outdoors waiting for an opportunity to enter the neighboring country or have found themselves at this point because they were transferred to Serbia by the Croatian police, even though they did not enter Croatia from Serbia. (English version below)

As with these days, in Principovac, we met a group of young men from Pakistan who were transferred by Croatian police officers to Serbian territory barefoot.

They are now in the camp at Principovac, and Asjad and his friends from Pakistan state that they had spent 3 months in camp in Bihać, Bosnia and Herzegovina. After three months of staying in BiH, they decided that in 100 of them, in smaller groups, would cross into Croatia.

As they told us, the Croatian police caught up with them, and immediately seized mobile phones as well as phone chargers.

Croatian police officers, as they claimed, that they estimated the value of the phone, they threw aside the older ones, and took the newer ones for themselves and put them in their pockets. But this was not the end, as they continued to tell us, the police then robbed them and took all the money they found and even clothes and belongings out of their bags.

In the end, Asjad tells us, the Croatian police ordered them to take off their shoes, shoved them into a van and drove them to the border and transferred them to Serbian territory.

In total 100 migrants barefoot entered the camp in Principovac, which was also witnessed by refugees who have been residing in the camp for a longer duration of time.

Prethodno Violence against minor migrants trying to cross the Croatian border
Sledeće APC in Lebanon, the country with the highest number of refugees per capita