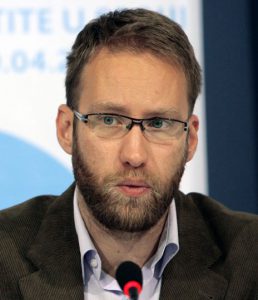 Since 2004 Rados Djurovic has  been active in civil sector in Serbia through student associations and non-governmental organizations engaged in the field of promotion and protection of human rights in Serbia. Rados Djurovic co-founded APC in 2007 to help meet the legal and psychological needs of asylum seekers and refugees in Serbia, and now serves as the organization’s executive director. A lawyer and human rights advocate, Rados received an award from the Office of the President of Serbia for outstanding contribution in developing Serbian civil society and protecting vulnerable populations. In 2015, Rados Djurovic received a recognition given by Serbian State Broadcasting Agency RTS, as one of five actors that marked a year 2015 in Serbian Society and in Serbian general public. Rados Djurovic is a member of European Movement in Serbia.

Since 2007 Rados has attended numerous practices in the field of asylum and refugee law abroad. Some of which include: Providing legal assistance to asylum seekers, Legal Information Center-UNHCR, Ljubljana, Slovenia; Asylum Law of the Republic of Slovenia and the right to asylum in the EU – Faculty of Law, Ljubljana; Investigation of information regarding asylum seekers’ countries of origins, COI reporting techniques, Austrian Red Cross, Vienna, Austria; Asylum legislation of the EU and the asylum situation in Greece – European Asylum Lawyers Network, Athens, Greece; Introduction to Asylum Law and EU Asylum Policy – EU Organization for the Advancement of Knowledge of EU Member States in Asylum, Warsaw, Poland; EU Asylum Directive – EU Organization for the Advancement of Knowledge of Officials of the Union Countries in Asylum, Warsaw, Poland; Vulnerable groups in asylum and migration, women, children, victims of violence and trafficking, protection, risks and relocation issues – European Network of Asylum Lawyers, Leuven, Belgium; Law of the European Union and the Policy on migration and asylum – University of Brussels-ULB, Faculty of Law, Brussels, Belgium, etc.