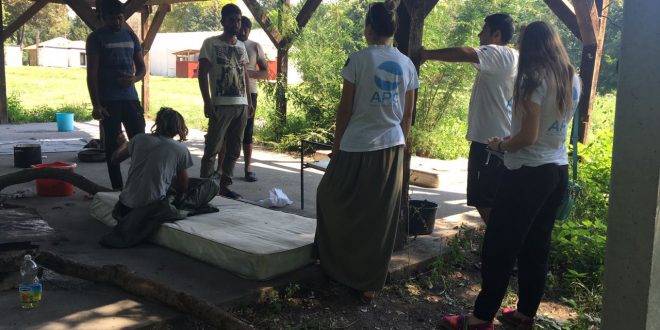 Violence against minor migrants trying to cross the Croatian border

Sid / Sombor, September 21 – An increasing number of migrants from Serbia are trying to enter Europe across the Croatian border, among them a large number of minors aged 12 to 17, and are often subjected to physical violence and torture. (English version below)

Our mobile team meets with them, primarily migrants from Pakistan and Afghanistan in the northern border area towards Croatia where there are currently at least 300 people living out in the open.

At least a third of them are unaccompanied minors, boys and teenagers whom we are trying to help as much as we can.

Through their stories we hear that some of them came into Serbia 20 days ago, but most of them arrived only 7 days ago.

These boys are in a very difficult situation, some of them have already attempted an illegal move. They were returned and suffered, as they say, physical violence and torture. Croatian police beat them, as cited by them, robbed them of their mobile phones, and they remained without contact with their families, which is a severe psychological blow for their age.

These crossings are very dangerous, and the possibility of overturning is threatening, because they are small rubber boats in which sometimes there are as many as 20 people.

Our team is trying to bring attention to these people, and above all to the unaccompanied minors, of the dangers they are exposed to and inform them of how they can exercise their right to live and stay in camps.

In the last two days alone, we have advised and informed about 50 unaccompanied minors who are outdoors in the municipalities of Sid and Sombor.

Otherwise, in the camps on the northern border of Serbia there are 1,200 refugees.

Most of them, about 800, are located in camps Adasevci and Principovac, where according to field reports, all capacities for accommodation are currently filled.

Along the border with Croatia, at least 300 people currently reside in open locations, mostly from Afghanistan and Pakistan.