ASYLUM PROTECTION CENTER (APC) was founded in 2007 and from the very beginning of the asylum system in Serbia (2008) has been providing legal, psychosocial and interaction/integration aid to exiles, asylum seekers and persons who have been granted asylum or other protection in the Republic of Serbia (with special focus to children and youth- providing legal, psychosocial, interaction/integration aid to minors, unaccompanied minors and youth). APC is foreseen by the Strategy of the Government of the Republic of Serbia on the Management of Migration as an organization that provides legal and other assistance to asylum seekers in the system in Serbia (Official Gazette of the Republic of Serbia no. 59/2009.). APC is a member of the European Council on Refugees and Exiles (ECRE), as a unique organization in its daily field work, providing comprehensive support to asylum seekers ranging from free legal aid to psychological, social, interaction/integration assistance and works, all through APC teams of lawyers, psychologists, social workers, educators, volunteers, interns and translators – in all places where asylum seekers are situated throughout Serbia. Activities of the APC as grass root organization are reflected through our strong presence and engagement at local levels in local communities, in order to establish a dialogue and interaction between asylum seekers/refugees/exiles and local citizens; primarily through the organization of public local events, exhibitions, fairs, asylum corners, interaction/integration, creative and other workshops, round tables, work of APC local networks of volunteers and APC interns, cultural mediators support and other events and activities in local communities, as well as through numerous collaborations with local governments, organizations, institutions, schools, local cultural and youth centers. APC political scientists and researchers actively work in the field of research and advocacy, using extensive APC experience and field data, in order to get to the root of issues and problems of the migration, asylum system and refugees, strengthening and spreading information to the wider general and local public and experts, advocating and fighting to reduce prejudice and xenophobia in local and general public thus buidling more tolerant and inclusive society in Serbia. 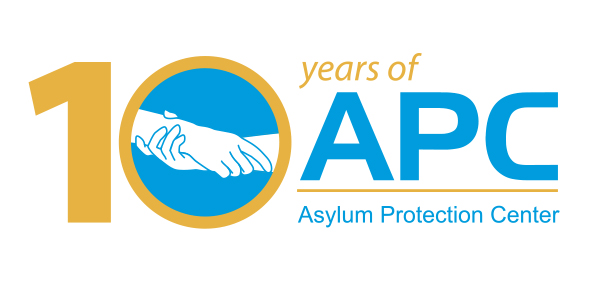 Asylum Protection Center (APC/CZA) was established ten years ago, on December 5, 2007 as the first and only specialized, and professional organization in the field of dealing with the protection of asylum seekers and providing legal, psychological, social and interactive assistance to asylum seekers in Serbia, which has remained until today.

APC/CZA today operates in all locations where asylum seekers and migrants are located across Serbia, as well as having functional regional offices in Belgrade, Presevo and Subotica.

At the time of APC/CZA’s establishment, the asylum system in Serbia had not yet been functioning – its existence was marked by the implementation of the official Asylum Law on April 1st 2008.
APC/CZA is fixed in the Strategy of the Government of the Republic of Serbia for Migration Managements (Official Gazette No. 59/2009) as an organization that deals directly with the legal and further protections of asylum seekers and refugees in Serbia. Through such, the organization has gained an institutional position in the management of  the asylum and migration system in Serbia.

As a result of its role in establishing groundwork in systems and institutions of asylum in Serbia asylum, as well as in the launching of existing positive practices in the country, Asylum Protection Center in 2011, became a member of the pan-European association of organizations; dealing with the protection of asylum seekers and refugees – the European Council for Refugees and Exiles (ECRE). As well, since 2016 APC/CZA is a member of the European Asylum Support Office (EASO). In this way, the extent of the organizations reach goes far beyond the local and regional level, across multiple European levels and beyond.

Since its founding, lawyers, psychologists, pedagogues, social workers and translators that make up the APC/CZA team have worked first hand with the refugees and migrants in the first asylum centers. Since the opening of the Balkan route, our team can be found  across all reception and transit centers, parks, buses, railways stations, at improvised shelters in open air surroundings by the border, in suburbs, on the streets, in forests and in institutions for youth. We have reunified families, discovered smuggling routes and found children who had been lost. Our team continues to protect persons from discrimination and violence, while simultaneously reporting abuse that are endured by vulnerable groups of migrants and refugees. With the help of Social work centers we have placed children in foster families, enabled the healthy births of children, provided birth certificates for refugee babies born in Serbia and reunified children with their families… we have ultimately helped wherever we could. APC/CZA has established one of the first mobile applications in Europe – “Asylum in Serbia”, providing not only all necessary basic information, placing mechanism tools for reporting abuse in the hands of migrants and refugees, that are necessary in their journey’s through the country, or their long term stays in Serbia.

APC/CZA provided the first asylum, refugee and subsidiary protections in Serbia onwards from 2009. Serbia did not allocate a large number of granted asylum cases but out of 107 asylum instances granted nearly half were approved through the legal assistance of APC/CZA.

With tireless legal assistance and interpretation of regulations, we managed to provide health care (primary, secondary and tertiary protection) to asylum seekers who should receive care equal to the rights of Serbian citizens.

In cooperation with local communities in Bogovadja and Lajkovac, the APC/CZA team, as early as 2012 began enrolling the children of asylum seekers into the Serbian educational system, in both elementary and secondary education institutions. We currently continue with this practice and as a result of our engagement with children who attend elementary school in Belgrade, Krnjaca, Sjenica and Tutin, they are able to receive full-time education, have become excellent and thoroughly satisfied students.

We are the first in Serbia to have begun the integration process of refugees and asylum seekers in the country- by assisting them to find work, accommodation, the obtaining of documents, ease in overcoming psychological problems and adaptation problems that may have resulted due to their new environment surroundings, regulations, mentality and the culture in Serbia.

We have managed to validate and recognize the first pages of diplomas for those who received asylum in Serbia.

We provided the first work permits for more than 40 asylum seekers and those who received asylum and established a legal practice enabling and ensuring them with the right to work.

Through court proceedings we have won a ban on the expulsion of refugees and asylum seekers from Serbia.

Furthermore, APC/CZA also led disputes before the European Court of Human Rights in Strasbourg in order to protect people from illegal deportations from Hungary and Serbia and managed to ensure fair and equitable proceedings before the competent institutions.

Over the past ten years, we have legally informed more than 220,000 migrants, asylum seekers and refugees, about their rights and obligations in the country in which they are located. We lawfully advised more than 23,600 asylum seekers and represented them in asylum and other proceedings, as well as before Misdemeanor, Administrative, Constitutional Courts and other instances.

Our psychologists advised and empowered more than 7,000 asylum-seekers and refugees who needed help – through social assistance, and workshops, we advised more than 3900 asylum seekers.

We have held over 937 different workshops (cultural, creative, empowering, health, language, school preparatory, and integration, psychological) with more than 4000 asylum seekers taking part in our activities.

We have crossed over 400,000 kilometers with our mobile teams across Serbia.

Our web pages were visited by more than 180,000 different people this year alone.

APC / CZA has trained and taught practices of how to work with children and vulnerable groups, to more than 100 interns and young professionals from the country and abroad.

We have built a volunteer network with over 170 volunteers.

Today in Serbia there is no other organization working with refugees where one of its employees has not undergone training, professional development or had a job at with Asylum Protection Center.

We are particularly proud of our work related to informing the local community about refugees and migrants – people who have fled from war, persecution, poverty, who have come from various cultures, while at the same time informing the migrants about Serbian culture, customs and the rules of their new environment surroundings.

With all of what we have done and of course what has been done by the state and its institutions, who have a primary duty to manage and care about migration, enough has yet to be done to confidently say that the situation with refugees in Serbia is at a good place.

Currently there are far more than 5000 migrants in Serbia, of which up to 4000 are housed in reception centers, while others are in the open, in forests, in suburbs, abandoned buildings or in alternative accommodation. The Balkan route is formally closed, but dozens of people continue to enter the country from Bulgaria and Macedonia every day, while in Vojvodina the largest number has accumulated near the borders of Croatia, Hungary and Romania.

Illegal deportation of people from Croatia, Hungary and Romania to Serbia is a continuous and illegal practice, and people have been illegally pushed back to Serbia, even in instances when they had not previously travelled through the country.

This brings Serbia into the position of becoming a buffer zone for migration and as a new hotspot on the migration route, which ultimately leads to extensive and far-reaching consequences for the future.

The longer retention of these people in Serbia and their increasingly difficult transition into EU countries, if that is their goal, requires a change in approaching this problem.

Migrants currently have difficulty accessing accommodation and asylum procedures, and registration. They are violated of their fundamental rights as asylum seekers in fair and fast procedures, free legal aid, freedom of movement. This places a vulnerable group of people who are often exposed to abuse and violence more and more, in situations of prejudice and prevents integration and interaction with the local environment, and community while promoting the use of smuggling and crime.

These circumstances require a greater engagement by our organization in informing migrants and providing legal protection to asylum seekers and refugees in proceedings before all institutions, bodies and courts of the Republic, as well as monitoring the application of regulations and behavior on the ground through the process’ of border monitoring and abuse.

It is very important that our organization keeps its independence, professional and objective approach to problems, while continuing to cooperate with the media to objectively inform citizens and the public while continuing our fight against prejudice and disinformation.

APC / CZA will continue to train and provide professional practices for young professionals with its accredited training programs for civil servants while working intensively with local communities.

APC / CZA will furthermore continue its engagement in the integration of those who have received asylum in Serbia, as well as in supporting the system itself and pushing for the improvement of existing practices, and cooperation in the region. As well, our team will work with secular organizations at the European level who will also be a priority in the fight against prejudices, and in raising public awareness of these problems, in building solidarity and permanent networks of cross-border cooperation between organizations in Europe.