Početna / PRESS / OTHERS WRITE / Stranded on the Serbian-Hungarian border

Stranded on the Serbian-Hungarian border

Reške, May 14 – Ahmed with his friends, cooks water in a metal pot. Their campfire is located in Serbia, just a few steps from a barbed wire barrier in front of the border with Hungary. Ahmed, who was a law student in Damascus, has been in Serbia for two months and has been waiting for 20 days, for passage through a transit zone. He sleeps in a tent made of blankets, eats cookies given by UNHCR, and uses the shrubs as a toilet.

Since September 15, migrants who wish to enter Hungary through Serbia have two options. The first is an illegal crossing, with risks of being cut by the fence and possibilities of arrest and expulsion. Such people – about 150 per month – usually return across the order and re given a one-year ban on re-entry into Hungary. Since Serbia does not accept migrants returned from Hungary, there is nothing left for them to do in another country.

The other option is to enter one of the transit zones that are located along the southern Hungarian border. There are four such zones – two on the border with Serbia and two on the border with Croatia. These are closed areas with prefabricated houses. Transit zones are legally neutral spaces that enable the Hungarian authorities to easily return asylum seekers back to Serbia without solving their demands. Those who enter the transit zone can apply for asylum in Hungary and await the response of the authorities. In certain cases, authorities may require migrants to return to Serbia through the transit zones. The zones are monitored by the military and the police and they are formally administered by the Office of Immigration and Nationality (OIN).

Men travelling alone have to wait for the response of Hungarian authorities in the transit zone in which they filed the request. Within 28 days, the authorities make a decision and if it is positive, the claimant is transferred to the Hungarian camp. Womena and children only wait one day for the decision. Transit zones have a capacity of 50 people – newcomers are accepted only when someone frees up a space.

It is because of this that Ahmed and other asylum seekers have to wait several weeks for the opportunity to enter the transit center. Hungarian open the gate to the center two to three times a day – almost every day – but vulnerable groups such as families, children, women and handicapped persons have priority. When we visited a transit zone near the Hungarian village of Reska, about 40 men waited outside the gate. Village residents say that new groups of 8 to 10 people arrive each day.

Adris, 18 year old, from Afghanistan,  came from a transit zone on the border with Serbia, from Tompa, where he waited 12 days. He estimated that there was no way he could enter that zone, as there are many families waiting there, he says. So he decided to come to Reska.

For him, it is an aggravating circumstance, and the fact that there are no translators for the Persian lanuage -“they always say they have only Arabic translators”, Adris told the OIN representatives, making them aware that the selection process also depends on the translators.

Erne Simon, a spokesperson for the Hungarian UNHCR office, says that the authorities often decide on who to let into the transit zone on a random basis, adding that the situation often ends in chaos.

And while OIN allows UNHCR personnel to enter the transit zones and give supplies to people, the situation of those who are waiting outside of these zones remains critical. Erne Simon says that more than a hundred people have been seen in front of the gate of the transit zone recently, sleeping under the open air.

Half of the twenty tents we’ve seen in Reska have ripped summer tarps; the other half is plastered with blankets and plastic covers. Running water, migrants take from one mounted pipe carried out of from the transit center; there are no toilets; there are no shops or other possibilities to get food. “The situation outside the transit zones is unacceptable and is not in line with what Hungary is obligated to do under international law,” says Lidia Gol of Human Rights Watch. 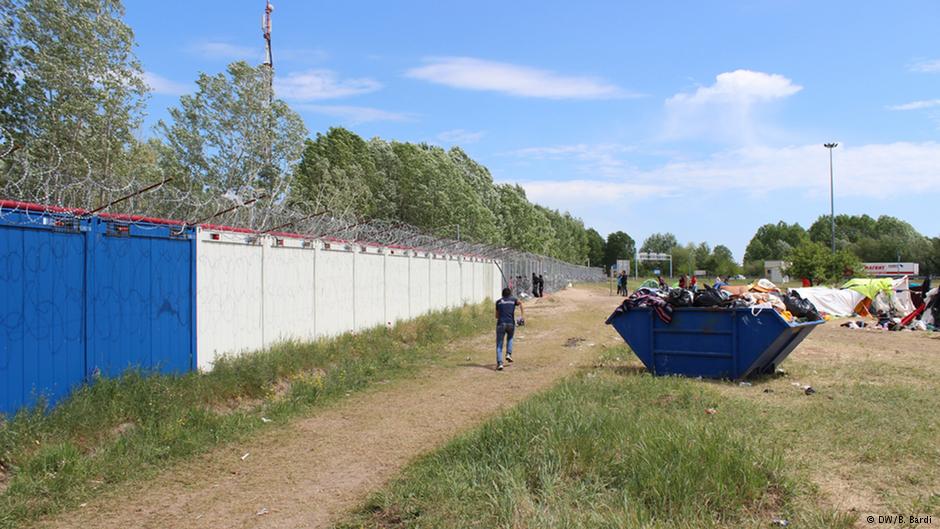 Gol adds that many migrants have to wait in the gates of transit zones because OIN requests of asylum are not put through fast enough – a bulky bureaucracy creates a delay in the processing of the subject. She thinks that the bad situation at the border is the consequence of this slowness and that many therefore see no other possibility than trying to cross the border illegally.

A representative of OIN told DW: “There are no legal provisions that the Hungarian authorities should adhere to when it is about the accommodation and supply of people waiting for entry into the country.” In addition, OIN officials share food packages to people waiting outside transit zones every day. The entry is slowed down because we need to conduct interviews with those who are sent to reception centers – so it was decided after the attack in Brussels.”