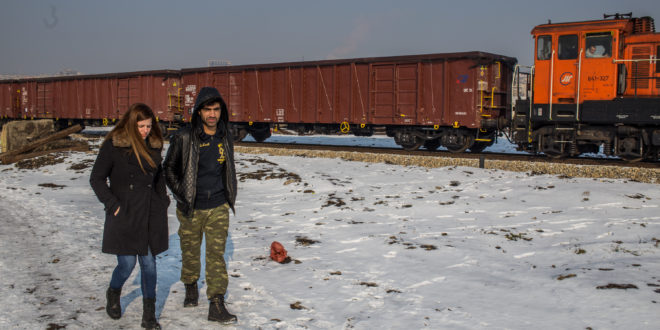 Jan’s insoluble will and temporary home

Belgrade, February 8th – We met Jan in the park near the bus station in Belrade almost half a year ago. He had been in Serbia for three months and during that time he tried to cross the Hungarian border five times.

This nineteen year old youth from a village near Kabul is still here. Nothing had changed during his uncertain life, except that the last two months in Serbia had been a harsh winter and Jan slept in a house near the railway line, and he tried to cross the northern borders of our country eleven times. Again they unleashed dogs on the Hungarian border, arrested him and deported him in Zagreb, he tried to pass the Tisa a couple of days ago, but the ice was weak and his accompaniment, and  another did not make it…It’s hard for him to constantly explain what’s happening to him and why he left Afghanistan. Because there is no life there, because there is an explosion every day there, you never know who sees an enemy in you, because I can not hope for anything… he expressed his own torment in a few words spoken in a breath and does not want to talk about it a lot. As if, he is hurt by the uncertain situation in his own country of origin.

Jan is again in Belgrade, in an abandoned house near the railway line. And he did not give up. This educated, clever young man has a goal and for now an unbridgeable will. He wants to be an information engineer. Before he started his journey, he was learning English for three years.

“I wanted to get ready for a new life. I want to enroll in college in Belgium, to integrate into the society. And my languages are helping me here too. It’s easier for me to get out, people are accepting me more easily,” he says. Jan’s elder brother lives in Belgium. About a year ago, Jan and their youngest brother, Abdullah, followed him.

But as is usual on the refugee route, plans are one thing, and reality is another. Dreams are hard to achieve.

Jan and his brother moved from Afghanistan to Turkey. There they were for a few months, and when the conditions were right they continued on wards – through the sea to Greece, and then on to the Balkan route to Europe, there was only enough money for one.

Jan sent his brother, convinced that he would soon be behind him. And he arrived half a year later when the Balkan route was already closed somewhat, to Serbia.

He thought he would succeed in crossing the borders that he had left on his journey. It turned out that there was a very small chance to find himself on the list of ten people daily they allow into Hungary, at the two border crossings.

He tries to do it alone, but is unsuccessful. But he does not give up. ANd he does everything to make as much of his temporary life here as is tolerable. He even tries to make a home in Belgrade, in a small abandoned guard house somewhere on the hill between the railway track, which only freight trains, and along the river, boats sail.  This illusion of normality – cooking on big drums and lunch on it, a pair of carpets spread over the pathway underneath the floor and the remains of linoleum, wire barrels, a red-tailed linens…is Jan’s way of surviving and to feel like a man. So that his enthusiasm does not diminish and he does not quit feeling hopeful.

He is not alone. There are eight of them in this little house. ALmost everyone has someone in Northern Europe and financial support is enough to provide food and some small things.

They assembled by some kind of affinity. They are organized and disciplined. They live as a family.

Isa cooks. He says he never did that at home but he’s working on it now. And he enjoys it. He recalls almost everything his mother was doing while cooking for him and his numerous family members. He and Jan mostly go shopping in the market. They say it is cheaper than in the stores. They’re trying to save money. Everything is expensive, and they do not go and wait in line at an abandoned hangar where one humanitarian organization gives meals once a day. Jan says since being in Belgrade, he has spent 2,000 euros, on food and hygiene.

The King as they call their taller countryman, with his abiding posture, is in charge of providing some kind of information. He is often in the park among migrants, inquiring about their experiences…with newcomers, gathering news about the ways they crossed borders and searching for information from Afghanistan.

Vahid is in charge of hygiene…He does not regret it, although he is from, for his circumstances, from his imminent family. His grandfather had a shop in Kabul, and three generations from his family are in exile. His father went to London 16 years ago. He set off on the road the night he had returned from the wedding of his cousin, and their van was attacked by a group of Taliban. Two of his relatives were killed. He survived and here he is in Belgrade. He tried to cross the border three time. He believes that he will have more happiness when warmer days come.

These men called us one day to stop by for lunch. In their Belgrade home near the railroad, on a Saturday in winter, with Afghan chicken paprikash they welcomed us, and with fruit and beautifully arranged flowers it was a warm and quiet welcome. Salih serves us, Isa expects our compliments towards his cooking and his culinary specialty. We say that their chicken paprikash is the same as our, and it seems that they did not believe it.

The room is full. We speak somehow in silence. Nobody is interrupting each other, everyone is waiting for us to serve ourselves first, and then they join us in a timely manner. We are talking about their journey’s and how they are here. It’s not good, they say, but it’s not where they came from. They can not go back.

After two hours, Jan and Isa follow us along the shore.

We promise that we will meet again with another Afghan specialty, but only on the condition that we buy the ingredients, to socialize.

We speak common phrases exchanged between guests and hosts, we look each other in the eyes and think of our own thoughts. They: maybe even tomorrow…

Us anxiously: what will they bring to them tomorrow?

Prethodno How Zahid’s hopes sank into tears
Sledeće What holds the future for Europe’s migration and asylum? Sharing best knowledge and EU practice on integration of migrants and existing challenges in Balkan countries, through Italian and Austrian models and best practices