Početna / CURRENTLY / LATEST / What holds the future for Europe’s migration and asylum? Sharing best knowledge and EU practice on integration of migrants and existing challenges in Balkan countries, through Italian and Austrian models and best practices

What holds the future for Europe’s migration and asylum? Sharing best knowledge and EU practice on integration of migrants and existing challenges in Balkan countries, through Italian and Austrian models and best practices

Asylum Protection center-APC, has organized a conference in Belgrade on 2-3 March 2017, under the name “What holds the future for Europe’s migration and asylum? Sharing best knowledge and EU practice on integration of migrants and existing challenges in Balkan countries, through Italian and Austrian models and best practices”, funded by the Central European Initiative and co-funded under the project – Balkan Refugee Trail, a Pathway for European Solidarity supported by European Commission – Europe for Citizens Programme.

This event brought together more than 30 experts from non-governmental and governmental organizations from 14 European CEI member countries strongly affected by the ongoing “refugee crisis”, therefore timely representing an excellent platform for discussing the development of the concrete migration integration challenges, policies and practice, as well as for exchange of experiences, best practices and lessons learned from the field in their respective countries with special focus on interaction and integration models and positive practices from Italy and Austria. Participating organizations were, Center European Initiative from Italy, Interkulturelles Zentrum from Austria, Helsinki Foundation for Human Rights from Poland, Organization for Aid for Refugees from Czech Republic, Center for European Policy Studies from Brussels, MigHelp from Hungary, Centre for Peace Studies from Croatia, Macedonian Young Lawyers Association, Bulgarian Helsinki Comittiee, ICS Ufficio Rigugiati from Italy, Legis from Macedonia, Pravno-informacijski center nevladinih organizacij – PIC from Slovenia, Greek Council for Refugees, organization Think-Difference from Austria, and others. 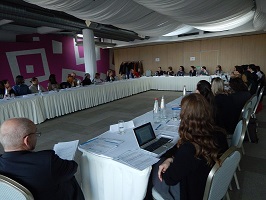 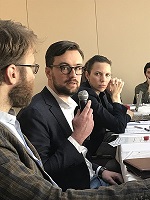 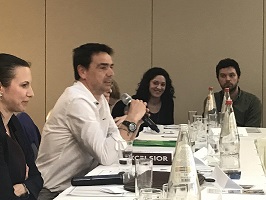 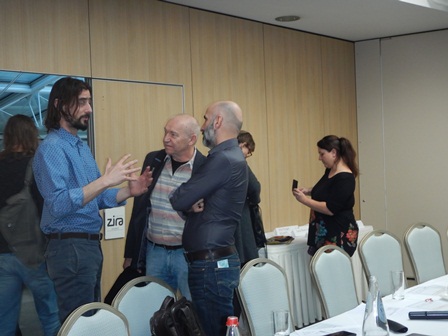 The first panel explained the advantages and disadvantages of the new and ambitious reform of the European asylum system, starting with the reform of Dublin, the adoption of new regulations in the field of asylum and migration between the European Union (EU) and the countries of the EU external borders, the reform of the EURODAC system, and the new mechanisms for the relocation of refugees in Europe.
The second panel focused on the new role of Frontex at the external borders of the EU and on the expanded role of the EASO as the leading organization for asylum in Europe, and the impact of these two organizations on the countries of the Western Balkans. The presentation and the interactive discussion was led on the role of the CEI countries on the Balkan route, on the expanded role of Frontex and in that regard on the reduced the role of civil society in the new reforms of the asylum system in Europe.

The third panel was devoted to current events in the countries on the Balkan route, Greece and in Italy, such as the accommodation of migrants, frequent deportations, perceptions of local communities and on the state of integration in the aforementioned countries. The panelists shared their experiences, good and bad practices, emphasized the needed changes in migration and in asylum policies in their countries and in the region.

The third panel served as an excellent introduction to the fourth panel concerning European solidarity. The fourth panel revolved around the presentation and discussions on mutual cooperation of countries in the so-called Balkan route and beyond, and by strengthening the role of civil society and local communities in Europe. Panelists through deep emotion and compassion exchanged views on forgotten social values, the poor state of solidarity in society, apathy and the need to awaken local communities through targeted media campaigns and political advocacy as manners of initiating and strengthening interaction, integration and inclusion of refugees in local communities.

The fifth panel was essential for the conference and dedicated to the best practices of integration of refugees in European societies, with the special emphasis on Italian and Austrian best models and practice. The purpose of the fifth panel was to present concrete models of integration, challenges, best practices and share knowledge with Balkan CEI countries representatives in these challenging times, with special emphasis on the benefits of diversity, inclusion, and the need to connect multilevel processes between institutions, social environments and refugees.

This event was a unique opportunity to exchange new ideas, knowledge and expertise among the countries influenced by the refugee crisis, as well as presented itself as an opportunity to expand the influence on the development of new policies and practices in the area of sensitization of local communities and on the integration of refugees into European societies. As a final review of the discussions that took place during the two-day conference, “What holds the future for Europe’s migration and asylum policy and practice? Sharing best knowledge and EU practice on integration of migrants and existing challenges in Balkan countries, through Italian and Austrian models and best practices”, together with other panelists and participants it was pointed out the need for consistent advocacy and media campaigns in the future, stimulating the implementation of a shared approach on dimensions of common interest suitable for regional cooperation such as the integration policies and the fight against the discrimination and xenophobia.

The conference promoted European values, principles, shared lessons learned and good practices in integration policies as well as presented various integration systems and technical practices to participants, and promoted the alignment of non-EU CEI member states to the EU standards in the field of immigration/integration. The goal of raising the non-EU CEI member states skills and competence was inspired on non-discrimination principles, human rights solidarity, equal enjoyment of social, economic and cultural rights, and diversity management capacities based on the intercultural dialogue and protection of minorities. In compliance with the wider CEI principles, the participation of a wide CEI member states stimulated the networking and the cooperation with European as well as Non-European member states in order to contribute to the improvement of the integration and democratic management in those countries that are experiencing the raise of multiculturalism.