People from Algeria, Syria, Senegal, Tunisia, Niger, Congo and Afghanistan have seen on television images of horror that befell our country and applied themselves to participate in the cleaning and renewal.

Asylum seekers were among the first to offer assistance in renewing Krupanj, which is seriously affected by the disastrous floods. We helped them and gave them decent living conditions while awaiting a decision on asylum, and they decided to return the favor now when we pass through this difficult period. Asylum seekers accommodated in Banja Koviljaca arrived yesterday to help locals in Krupanj. They were working hard in the village of Zarkovaca in order to eliminate the effects of the disaster that struck this place, especially in the part where the water has toppled houses, destroyed the bridges and “cracked” roads.

More photos can  be seen  HERE 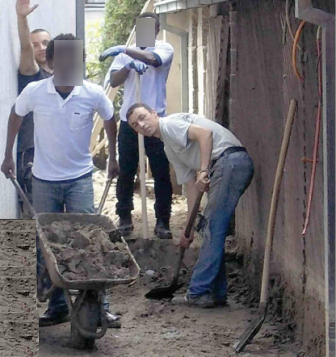 First wanted to go to Sabac

According to the words of the manager of the Asylum Center, Robert Lestmajster, asylum seekers saw on television the scale of the catastrophe that has hit Serbia and applied themselves to help. 50 of them wanted to go to Sabac, but the roads were cut off. “Since we were informed yesterday that we can come to Krupanj, we immediately bought tool, prepared dry meals and send 35 asylum seekers who have applied to go to this place. They help the villagers to throw mud, sand and sludge from the backyards, basements, boiler rooms and houses. They work in the village of Zarkovaca, in 10 houses near the river Zmajevac. We will see with the people from the municipal headquarters, what, where and how we can help, and if there is a need, we’ll come every day”, said Lestmajster.

Asylum seekers from Algeria, Syria, Senegal, Tunisia, Niger, Congo and Afghanistan have come to Krupanj and tirelessly, shoulder to shoulder with the locals of Krupanj, fill the carts with mud and sand and remove it from the backyards.

“I have seen horrible pictures on the television and I wanted to help this people. This is terrible, it is difficult to see what these people survived. We all want to help and we will work here as long as it takes”, said Taeb from Sudan while he is taking out sand from a garage.

Isaac is from Niger and says that there were also a lot of terrible things in his country so he profoundly sympathize with our people.

“We came here to help as much as we can. If necessary, I’ll come every day. I understand the feelings of this people and in my heart is a great support to them. We work together and we will succeed to do whatever it takes”, said Isaac.

Our heart is full

“In the area of the village where I live is not so terrible, but here it is and that is why I’m here”, said resident Goran Grujicic from Krupanj.

“My heart was full when I saw these people help us. We work together and get along well. I feel big gratitude towards them for such a human gesture. Their help means a lot to us and we will surely do all the work faster”, says Goran while with asylum seekers removes the dirt left by water.