Asylum seekers who were evacuated from Obrenovac to Baric, and then on Saturday also evacuated from Baric, are located in the Asylum Centres in Sjenica, Tutin, Banja Koviljaca and Bogovadja.

Asylum centers are mostly full, and Tutin has nearly twice as many people than it can normally accommodate. 184 asylum seekers, of whom 3 women are accommodated in the Asylum Center in Tutin. All asylum seekers are single, but there are also two families, one of which is with a child. The situation is similar in Banja Koviljaca, where because of a large number of asylum seekers, 109 of them, the common living room was adapted to be able to receive all. From the total number of asylum seekers there are 8 women and 4 children. There are just a few more free places in Sjenica, where currently reside 129 asylum seekers. The situation is a little better in Bogovadja, where there are currently 40 free places. Families, women and children, are usually accommodated there. Among them, there are 35 asylum seekers, women and children, who were evacuated from Obrenovac and Baric, while the remaining 125 asylum seekers from Obrenovac and Baric, mostly men, were accommodated in Tutin and Sjenica. The good news is that everyone is taken care of and that there is no one who has not been admitted in one of the centers.

Evacuated asylum seekers feel good and have a roof over their heads. No one was injured or medically threatened, although a few people, among whom were pregnant women, were complaining on colds, headaches, fatigue and stomach problems. Considering that they have left all their things in the hotel in Obrenovac, there is now an increased demand for clothes and shoes. Hygiene supplies and medicines are also required in the asylum centers, who are faced with a large number of people.

According to the latest information, hotel Obrenovac has been robbed during the past few days, when the thieves burst and took what they have find. When favorable conditions create, personal belongings of asylum seekers that were saved will be transferred to the asylum centers and returned to their owners. All asylum seekers have reported items and property that they left at the hotel Obrenovac. 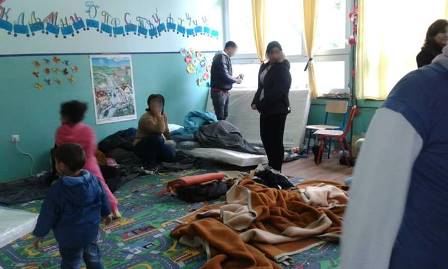