Početna / CURRENTLY / EUROPE AND MIGRATION / Trilateral in Budapest on migrants 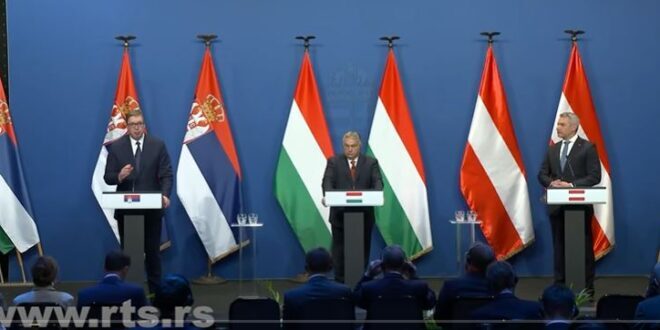 Trilateral in Budapest on migrants

Budapest, 10/03/2022– The President of The Republic of Serbia, Aleksandar Vučić, the Prime Minister of Hungary, Viktor Orban, as well as the Federal Chancellor of Austria, Karl Nehammer, held a meeting in Budapest, where one of the topics was migration. Orban says that the Western Balkans is the most difficult point. Vučić says that by the end of the year, Serbia will significantly harmonize its visa policy with the visa policy of the EU, so that Serbia “will not be used as a country for entrance, for illegal migration”. Nehammer points out that everyone is equally affected by the problem of migration.

At this meeting, a firm cooperation was agreed upon in solving the problem of migrant crisis. President Vučić is sure that Serbia will not be a hot-spot, nor it will be a parking lot for migrants. He also adds that he does not want Serbia to be a country for entrance, for migrants, who come from countries with which we have a visa regime.

Prime Minister Orban proposes the “defense line” to be moved from the Serbian-Hungarian border to the border that separates Serbia and North Macedonia at least. Also, to deport all those illegal migrants, and to create hot-spots outside the EU. The Austrian chancellor agrees with this and adds that this is why the EU regulations must be changed.

When asked about the influx of migrants and how the Western Balkans route can be relieved, Orban says that the defense border should be even lowered compared to the Serbian-Hungarian one, and that those who are staying illegally should be sent back where they come from. But that requires the help of the EU, as he believes.

“Three things need to be done: the first is to move the defense line as far south as possible, through which is impossible to pass. Now that line is on the Serbian-Hungarian border. This is not good for Serbia at all, we are not happy about it either. We should go further south, but step by step,” said Orban.

“On the other hand, those who stay illegally in our countries must be sent back to where they come from, and that requires a lot of work and a lot of money, which the EU should take on. This is the common interest of all the EU countries,” says Orban.

Austrian Chancellor Nehammer said that at the conference they found everyone is equally affected by the problem of migration.

“Although Austria is not on the external border of the European Union, we currently have around 70,000 asylum requests of people from India, Pakistan, Bangladesh and Afghanistan. Apart from that, Austria provides protection for 80,000 women, men and children from Ukraine,” adds Nehammer.

Chancellor Nehammer says that for Austria it means that it has a very important security problem, i.e. the issue of protection and stability of society, as well as that it is necessary to undertake everything “in our power to fight against the irregular migration”.

He also adds that the fight against smugglers can only be done through intensive cooperation.

President Vučić points out that the arrival of Syrian, Pakistani and Afghan refugees is increasing again. “As of today, we have about 17,600 registered refugees from Russia and Ukraine together. All that is not a small burden for a relatively small country,” the president notes.

“People in Belgrade don’t know what kind of problems our police is facing, but they do in Kanjiža, Vranje and Preševo. We decided to help by working together in Austria and Hungary. We will certify the agreement in Belgrade, we will make an action plan, and how to protect the other parts of Europe. Serbia will be responsible and serious, and we will succeed in doing that,” Vučić said.

The Hungarian prime minister, whose country initiated this meeting, because, as Orban states, “we are in a specific situation”.

“Problems with migration come from two directions, more than a million refugees have arrived from Ukraine and our lower southern border is under pressure, there are more than 100,000 crossings that we prevented,” said Orban.

He says that there are several tasks ahead of them. He said he doesn’t see the Brussels policy, which is affecting that, is changing and that there are other issues, such as food supply and famine in the world, which will all increase migration.

The most difficult point is the Western Balkans, because most migrants arrive through that route, people smuggling has been activated, they use sharp weapons in conflicts, notes Orban.

The country not only protects the borders of its own country, but also protects the whole Europe, adds the Prime Minister of Hungary.

He says that Hungary has already helped Serbia and North Macedonia, but that now a new dimension of cooperation is needed.

Now the cooperation should be raised to a higher dimension, after this meeting there will be a meeting in Belgrade, where the ministers will give concrete answers, says Orban.

He also points out that Serbia and Hungary, protecting their border, also protect the Austrian border and prevent people smuggling.

President Vučić says that Serbia does not want to be either a hot-spot or a parking lot for migrants, but it will continue to be in solidarity with those people.

Aleksandar Vučić points out that Serbia will always respect international law when it comes to migrants as well.

Austrian Chancellor Karl emphasized that partnerships are needed outside the EU, and that it is good the President of Serbia was invited to the meeting, because the Western Balkans is an important part of the European politics.

He underlined that Serbia, as well as North Macedonia must not be left alone in the fight against the pressure of migration.

The Austrian chancellor said, answering the journalists questions from that country about the change of the visa regime, that it would mean that Indians or Tunisians, using visa liberalization, could travel to the other EU countries via Serbia, but added that readmission procedures should also be ensured.

BRN joins in demand to Croatian authorities for taking responsibility in Madina’s death !