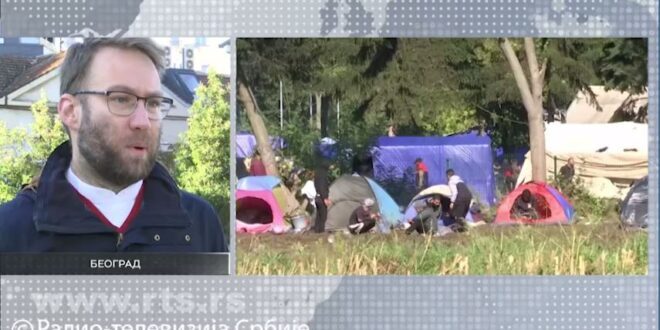 Belgrade, October 4, 2022 – The war in Ukraine, inflation, sanctions and the rising energy prices pushed the issue of migration and migrants to the background, but the migrant crisis has not ceased since 2015. This year, the number of migrants coming to our country has increased, says the executive director of Asylum Protection Center, Radoš Đurović. By September, more than 70,000 people had entered and most likely passed through Serbia in large numbers, says Đurović. He points out that visas should be introduced for countries from which people arrive in Serbia by plane and try to continue on.

”The migrant crisis has not stopped since 2015 for this region, but now the numbers are much higher. We have seen such an increase in numbers for the first time since 2016. According to our estimates, by September over 70,000 people entered and most likely passed through the country in large numbers, and the countries such as Austria and Hungary are recording an increased number of people seeking asylum, so the numbers at the EU level are over 400,000 for the first six months ’’, said Đurović.

According to him, the largest number of people come by land – from the direction of Greece, Turkey and Bulgaria.

“They come to our southern borders, up to 300 people enter per day, according to our estimates. They mostly want to move on, staying in our country for a short time. I will remind that the situation is particularly difficult in the north of the country, where there are thousands of people along the Hungarian border and where there are daily pushbacks from the Hungarians back to us, without respecting the protocol,” said Đurović.

Yet, he noted, they tirelessly try to get further and do not hesitate to use the services of smugglers. Next to the Hungarian border, on which he says is the greatest pressure, the part of migrants are trying to enter Bosnia and Herzegovina from Serbia and then continue their journey to the EU.

Đurović adds that we are still talking about younger people, between 20 and 30 years old, but that we should not lose sight of the fact that 10 to 15 percent of them are women and children.

“The largest number of people is still from Afghanistan, over 40 percent, but the second largest number are people from Syria, which indicates that these are refugees who suffer very difficult treatment in Turkey, and violence among other things. That is why they are trying to move on,” said Đurović and added that Turkey ascribed its difficult economic situation to the presence of Syrians, of whom, as he states, there are more than 3,000,000 on Turkish territory.

Speaking about the harmonization of visa policy with the EU, which was announced at the trilateral meeting in Budapest, Đurović said that is the result of another type of migration.

“People from countries that have a more liberal visa regime with Serbia come through the airport and try to continue from there. These are people from Tunisia, India, Burundi. And for them, Serbia should harmonize the visa regime, as well as the EU countries, to introduce visas for them, some restrictions that would reduce migration.

However, Đurović adds, there is a plan for harmonization with the EU, as well as strengthening of the administration.

He points out that it is a long-term process, because it is difficult to reach readmission agreements. He says that only Bosnia & Herzegovina in the Balkans managed to reach such an agreement with Pakistan.

“If we go the EU route, then visa harmonization is one step in the process we committed to,” said Đurović.

Đurović also stated that by September, 17,900 Ukrainians registered their staying in Serbia, and that over 95,000 people passed through our country. According to rough estimates, there are tens of thousands of Russian citizens, perhaps over 50,000, says Đurović, and he expects that number to grow.

As Đurović explains, Ukrainians try to bring their eldest ones, friends in all the possible ways. This is precisely because of the newly emerging events, out of fear of what will happen next in Ukraine, and they keep saying it every day, Đurović pointed out.

As he continues, Russians still choose the EU, but when that is not possible, they come to our country.

“People use flights to reach Serbia and, among other things, seek salvation here. Citizens can witness that on the streets every day, so the refugees from Ukraine and Russia will continue to come to us,” said Đurović, but he noted that Serbia is not a priority destination for them.