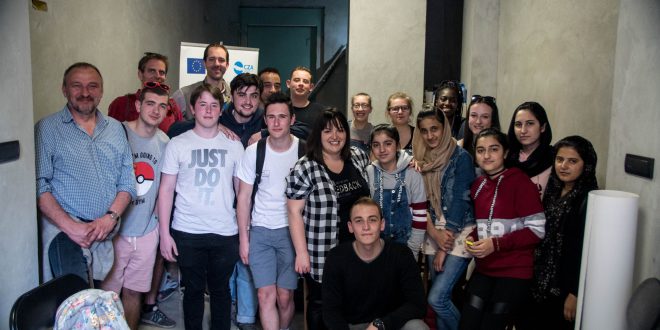 Belgrade, April 28 – Asylum Protection Center hosted twelve graduates from Belgium who visited Serbia together with their teachers and had the opportunity to gain new knowledge and experiences on migration, with help of APC team.

High school students from Belgium decided that instead of a classical prom excursion they would rather take on research in getting better acquainted with the topic of migration. When they arrived in Belgrade, our team discussed the role of Asylum Protection Center and the position of migrants in Serbia, but the most breathtaking experience was meeting their peers – high school students from Belgrade and the migrant girls from camp in Krnjača.

Our guests from Belgium shared their own experiences with integration of asylum seekers in Belgium, with pupils from Belgrade and 5 Afghan girls from the camp in Krnjača at an integration workshop held at the APC office in Gavrila Principa street, where we provide free legal help.

High school students from both Belgium and Serbia who spoke about their worries, fears and expectations regarding the integration of asylum seekers and refugees in Serbia were fascinated by the attitudes of the girls from Afghanistan.

Five girls (age 12 – 25) showed that they are open to new experiences, but that they also felt free to speak openly about their experiences so far. The younger girls regularly attend primary school, so they talked about how much school and spending time with their peers means to them, as well as the possibility to learn new things. One of the graduates from Belgium wanted to know what is motivating them to move every day, go out from the camp and to be included in every activity they’ve been offered – the response given to the graduate student was that the girls knew that by doing these activities they were investing positively into their own futures.

They explained that, even though they do not plan to live in Serbia they believe that learning the Serbian language is a good thing and that it would be a shame to spend a year in Serbia and to not learn anything. All of them talked about their own expectations, their understanding of the situation they are in and the challenges awaiting them in Europe where life differs greatly in comparison to their countries of origin.

This conversation helped the girls to perceive their own position as it is seen by the eyes of young people from Serbia, Belgium and other European countries.

The young girls from Afghanistan were very interested to know more about life in Belgium – how the country is divided, which religion is dominant, what language is spoken in which region, what motivated the young Belgians to go on this journey.

Their response was sincere – they wanted to feel new experiences, from travelling by train, staying in hostels in new cities which are not that popular when it comes to excursions, and to get to know migration processes and migrants.

They said that this meeting was very useful for them, it opened a whole new perception of the problems their peers and migrants are facing, but they also became aware of the expectations they have.

All of the participants of the workshop were active and they asked a lot of questions to each other. This helped in recognizing spaces which could be a fertile ground for misunderstandings, ambiguities and wrong perceptions about each other.