Početna / NEWS FROM APC / Roundtable: Issues and Challenges in the Asylum and support to the reforms

Roundtable: Issues and Challenges in the Asylum and support to the reforms

The Asylum Protection Center organized a roundtable called “Problems and Challenges in the Asylum and support to the reforms” in Belgrade on April 17th, 2014, as one of the final activities of the project “Improvement of the system of asylum protection in Serbia”, financed by the European Union.

Photos from the Roundtable can be seen HERE 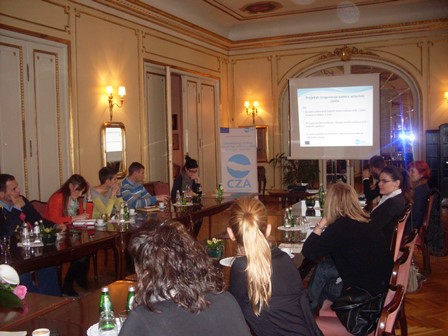 Participants of the roundtable among which were representatives of the Asylum Office, Border Police Directorate, the Commissariat for Refugees and Migration of the Republic of Serbia, the Red Cross of the Republic of Serbia, Ministry of Labour, Employment and Social Affairs, as well as the representatives of non-governmental organizations dealing with migration, exchanged experiences and opinions about recent developments in the field of asylum, among other matters about functioning of the new asylum centers, the problems with which the they face in their work, as well as the problems and disadvantages of functioning of the asylum system and the possibilities for its improvement.

Prethodno 2,055 asylum requests registered in Serbia in the first three months
Sledeće Conference: Challenges in the identification of victims among the migrant population