Početna / NEWS FROM APC / Conference: Challenges in the identification of victims among the migrant population

Conference: Challenges in the identification of victims among the migrant population

NGO Atina and the Asylum Protection Centre have launched new project aimed towards establishing a dialogue on tolerance between the local, Serbian population and asylum seekers from Syria, Afghanistan, Eritrea, Somalia …

Presentation of a project “Opening dialog within local communities – migrants and citizens towards tolerance and non-violence ” was held on April 25th, 2014. On this occasion was said that the project was initiated because those who are seeking asylum or passing through Serbia are exposed to different forms of violence, including human trafficking.

Various incidents, from burning barracks in Obrenovac to the protests of local citizens when they were blocking roads because of asylum seekers, were also the reason for making the project, was pointed out at the press conference.

Photos from the conference can be seen HERE 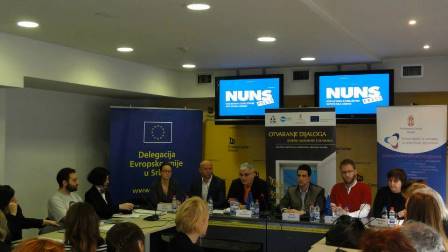 A representative of the Commissariat for Refugees, Ivan Miskovic, said that the number of those who have sought asylum in Serbia is increasing from year to year, stating that 44 people applied for asylum in 2008, and 5,065 people in 2013 – mostly from Syria, Eritrea, Somalia , Afghanistan…

Miskovic also warned of the growing trend of those who sought for asylum during this year, estimating that this number, due to various conflicts in the world, will continue to grow in the future.

According to data of NGO Atina, one woman from Syria was identified as a victim of human trafficking in 2013, while in the case of three other persons – one from Somalia and two from Afghanistan, was a reasonable suspicion that they also were victims of human trafficking.

Extreme poverty, as well as a number of other problems with which the asylum seekers face, indicate that it is necessary to develop mechanisms to detect problems on time and to resolve them in an efficient manner.

“We are facing major challenges, especially if we bear in mind that our asylum system doesn’t function. In the situation of a large influx of people, we already have 2,461 people who sought asylum until April 24th, 2014, which is one third of asylum seekers from the total number of last year, and if this pace of arrival of asylum seekers continues we will already reach a larger number than last year in September”, added Djurovic.

“A large number of migrants is coming to Serbia, but only one part of them request asylum, while a much larger number of them is looking to avoid procedures and only pass through Serbia, which indicates that besides the asylum population we also have the irregular migrants in very large number. When people come to Serbia, they do not exist in some parallel reality, they are present and they live in communities where they try to survive, to organize themselves, but often decide to continue further. This often draws the attention of both local residents and the public, and opens a space for possible misuse by various political and interest groups. It seems to me that this project precisely aims to strengthen the initiative of citizens, local organizations and informal groups of citizens at the local level on which fall the greatest burden when it comes to dialogue and interaction at the local level. We have to fight against prejudice and therefore the interaction at the local level is the one that can help in the efforts that right information on asylum seekers come to the public, both at the local level and beyond”, said Djurovic.

“Their life stories, their destinies, their suffering and needs are what the public needs to hear and understand. In order to achieve this we need to make the initial step and that is establishment of a dialogue. Fears that each of us has are the initiators of prejudices, but when you meet someone and realize that he or she is not different than you, that has similar problems, but that became refugee because of circumstances, which can also happen to you, you simply start to look at those things differently”, he added.

“When you meet two people or two children, you have a chance to create a bridge. That bridge, after has been established more than once, provides the results in the local community. Asylum fairs and exhibitions in places such as Bogovadja, Loznica and Lajkovac are good indicators of different opinions in the local community, especially the opinion of young people with progressive thinking, who are trying to improve the environment in which they live”, said the executive director of the Asylum Protection Center, Rados Djurovic.

Prethodno Roundtable: Issues and Challenges in the Asylum and support to the reforms
Sledeće Bulgaria: Asylum Seekers Summarily Expelled