2,055 asylum requests registered in Serbia in the first three months

A total of 2,055 people requested asylum in Serbia in the first three months of 2014, and most of them – 947, were Syrians, said the executive director of the Asylum Protection Center Rados Djurovic, adding that the asylum system still does not work, and that the number of asylum seekers continues to grow from year to year.

“The fact is that the number of the people who are coming is rising. In the three months since the start of this year, 2,055 people sought asylum in Serbia, which is equivalent to one third of the total number of asylum seekers last year,” Djurovic told at the conference about the crisis of the asylum system.

Photos from the conference can be seen HERE 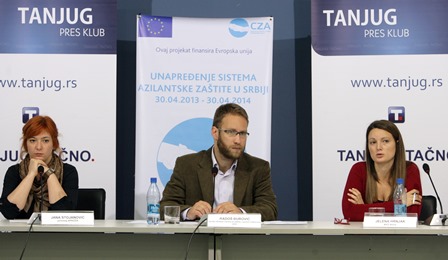 Although the state has taken measures to boost the accommodation capacities for asylum seekers from 250 to 500, he pointed out that we still don’t have a system that functions, which particularly applies to the Department of Asylum and it’s only a matter of time when we will not be able to withstand influx of asylum seekers regardless of the accommodation capacities.

He recalled that asylum seekers were in a very bad position during last winter, because system was not able to respond to problems, so that a bad image was sent according to which asylum seekers do not have guaranteed and secured rights in Serbia.

“That image has come up to the authorities that monitor the functioning of the asylum system in Serbia in front of the European Union which further complicates our position when we talk about negotiations and Chapter 24, which deals with the issue of asylum”, said Djurovic.

According to him, the Department of Asylum rarely visits the asylum centers, so that the initiation of the asylum procedure depends on whether a representative of the Department will come to the center or not.

He warned that no matter how many new people come, if they enter into the asylum procedure and not complete with it, because of the inefficiency of the Department, Serbia will have the problem with the accommodation of asylum seekers sooner or later.

“Out of the 5,065 applicants last year, only four have been granted asylum. Out of the 2,055 people this year, none were granted protection, which clearly indicates that the system is not functioning”, Djurovic concluded, adding that the system needs to change and improve.

He cited the example of people who fled Syria last year due to racial and religious persecution and even entered Serbia legally, but were not granted refugee status or provided shelter.

“The asylum act that is under preparation must be passed as soon as possible, preferably in the first half of this year, so that we can respond to the challenges that we will face in the autumn and at the end of the year”, said Djurovic.

According to him, the law should not be restrictive. “No detention and imprisonment of asylum seekers is not desirable, but the law itself needs to be progressive”, said Djurovic.

Noting that asylum seekers will continue to come in Serbia in the future, he said that it is necessary to establish a system that will allow us to appropriately accept these people.
The past two or three years have seen the emergence of a noticeable new trend of members of the migrant population being identified as victims of human trafficking, said Jelena Hrnjak, a representative of the NGO Atina.

“It is more than evident that trafficking of people who come from the migrant population is increasingly identifiable” said Hrnjak.

According to her, as early as in 2011, the first cases of migrant children without parental escort were registered as coming from Afghanistan, while in 2013, civil society organisations reported several cases of suspected human trafficking.

As she pointed out, there was recorded case of one woman from Syria that was identified as a victim, and also of three persons, one from Somalia and two from Afghanistan, for which was suspected to be victims of trafficking.

Prethodno Verdict for smuggling Albanians across the Tisa
Sledeće Roundtable: Issues and Challenges in the Asylum and support to the reforms