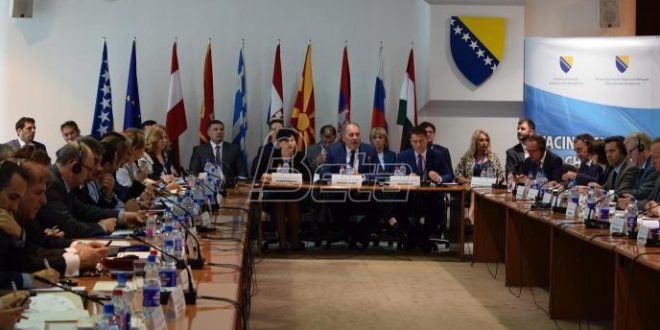 Representatives of the Balkans in Sarajevo: Joint actions to prevent illegal migration

SARAJEVO, June 7th – At today’s meeting in Sarajevo, representatives of the Western Balkan countries committed to jointly prevent illegal migration, smuggling and trafficking in human beings. Representatives of Austria, Slovenia, Croatia, Hungary, Serbia, Montenegro, Macedonia and Greece attended the meeting titled “Facing the challenges of mixed migration in the region of Security and Humanitarian Aspects” organized by the Ministry of Security and Human Rights and Refugees of BiH , and international institutions and services dealing with migrant problems.

The Council of Ministers of BiH announced that it was concluded that the systematic registration of migrants is necessary, the consistent implementation of bilateral readmission agreements and the organization of joint flights for the return of foreigners.

“The set goals must be successfully implemented so that the region … would not become a kind of ‘focal point’ for illegal migrants, which could lead to major humanitarian, political and security problems,” the statement said.

At the meeting, it was said that the Balkan countries “faced immense migrations in the recent past” and should show “a special sensibility and a human attitude towards migrants”.