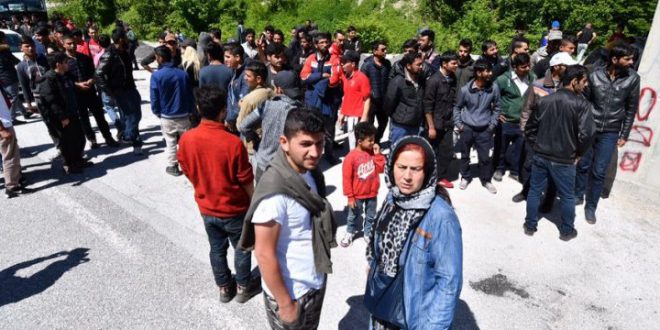 SARAJEVO, Maj 18th – Scandalous decision by the police of the Herzegovina-Neretva Canton that, despite the decision of state institutions, the return migrants and refugees who were sent from Sarajevo to Salakovac in five buses has caused great panic among the people who promised better living conditions, and now they are uncertain of what will happen.

13:44 – As time goes by migrants are in worse condition. Exhausted, tired and hungry are increasingly seeking medical help, and each time someone falls unconscious.

Our reporters at the place where buses await a further destiny report that they are upset migrants wanted to go out on the road, but the volunteers calmed them down. They are hungry and food has not yet arrived. They are constantly asking what will happen to them and why they are not being led anywhere. Some citizens come in and bring some food and baby food, but the uncertainty is still high.

13:27 – Marijana Dinek from the Foundation BH. Women’s initiative said: “Here are families and children who need a peaceful environment for a normal life.” We have a problem because there are unaccompanied children, there needs to be an urgent reaction, not a dispute to settle in. Here, women bear the greatest burden, they are exhausted, but they give us a smile. They are sick they and sad because they are separated from their families, since we are monitoring them since they are under international protection, we provide them with psychosocial support ”

MUP Police Commissioner Mevludin Halilovic told Klix.ba that members of the MUP HNK returned buses with migrants to Ivan-sedlo, pointing out that such decisions could be made only by the police commissioner.

According to our reporters from Ivan-sedla, where buses with migrants are parked along the road, the situation on the ground is chaotic. People are outraged, crying and scared of deportation. None of the authorities are there.

Among the migrants and refugees there are many women and 18 children, and volunteers try to calm them down. Many asked what happened to the camp in the Sarajevo park from which they boarded the Salakovac refugee center this morning.

After HNK police escorted a convoy from the territory of that canton to Sarajevo Canton, the buses were parked by the road, and then, to ensure them, special forces from Sarajevo arrived in 10 vans.

While state institutions do not make a decision to solve this problem, the convoy receives information and can stay overnight there.

Please note that these people were divided only by one meal, as they were expected to be in Salakovac for about 10 hours. Among them there are both hungry and sick and called Emergency help. They told our team that they were afraid and wanted to leave as soon as possible. They told us that the police stopped them on the road and told them to get out of the bus.

“We were told that we were going to the center, we rejoiced because they told us that we would have food, a roof over our heads and medical help.” “Now we are disappointed, we see that they do not want us.” We traveled through Greece, Bulgaria and Serbia so that we could It was difficult, my family has already gone before us, “one of the bus passengers told us.

According to one of the volunteers, Pakistanis mostly want to stay in BiH, while some people from Syria, Morocco and other countries want to join the European Union.

Social workers of APC/CZA help our clients on a da

Many of refugee are arriving to Belgrade with seri

APC/CZA team of pedagogue and social worker and cu

While visiting an open location in Sid, the mobile

In APC/CZA office in Subotica our team of lawyer a