Rados Djurovic, executive director of the Asylum Protection Center, said that there has been a significant increase in migration through Serbia lately, primarily due to the favorable geographical position of Serbia. This is corroborated by the fact that 5 065 requests for asylum were filed in Serbia during the last year, and nearly 1 000 requests for asylum that were filed only in January of 2014. Migration is a very complex phenomenon, and our society, and primarily government authorities, have not yet responded adequately to the challenges that migration carry with them. First of all, we are witnessing problems in the functioning of the asylum procedure, accommodation of asylum seekers, issue of border control and respect for the rights of asylum seekers.

Photos from the panel you can look HERE 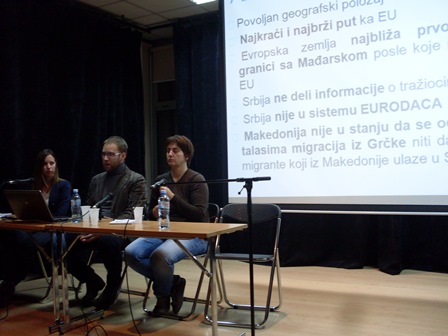 Marijana Savic, director of the NGO Atina, pointed out that a large number of asylum seekers and migrants in Serbia is exposed to the risk from various forms of violence and human trafficking, which is recognized as one of the key problems by the EU and for whose solution Republic of Serbia should also devote herself.

Sena Maric, a researcher at the Asylum Protection Center, said that there is a growing number of asylum seekers from Serbia, but also more frequent alerts to Serbia on the possible consequences of such as a reintroduction of visas.