“Not everyone are racists in Serbia. Believe me: I was in Greece”, says Marc from Congo on a fluent French. While standing in front of the hotel “Obrenovac”, he recalls his trip into a “better life” and the time when he arrived here only a month ago. He was not here on November, 27, 2013 when 76 people like him were moved to Obrenovac from the sweep forests around Bogovadja. He heard for the protests that welcomed the bus with these people, but was not scared: he experienced all sorts of things while fleeing from central Africa.

Events during that period in Obrenovac faithfully reflect one of the problems of asylum seekers in Serbia: due to riots in North Africa and the Middle East there is more and more people from the south (from recently and from the east) every year who are crossing the Serbian border while traveling to Western Europe. According to the State, but also the international laws, Commissariat for the Refugees and Migration should provide them with shelter and food, and the Ministry of the Interior should conduct the asylum procedure for those who want refuge in Serbia. However, the situation is such that there are not enough facilities, money and manpower to properly care of this galloping increase in the number of migrants, and on this problem sometimes influence and leads it to a boiling point the reaction of the local population that is uneducated, unprepared, and often politicized (riots like these in Obrenovac, have already happened earlier in Banja Koviljaca, Vracevic village near Bogovadja and in Mladenovac).

Marc from Congo is satisfied regardless of all with what he got in Serbia: “It’s great. Food, shelter, everything is better than in Bogovadja, and in relation to Greece is incomparable. The only thing I notice is that there is no job for the people who live here, so it is difficult to expect that it will be for us”.

Although the economic crisis is evident at every Marc’s step in Serbia, the importance of “asylum economy” is most evident precisely in Obrenovac. With sales growth of merchant and catering stores near the hotel, after a long period hotel “Obrenovac” has overcome its uncertain economic fate of the enterprise in reconstruction. Two-thirds of capacity are full for already three months. After eight months without a cent, 30 employees are receiving salary – regularly. 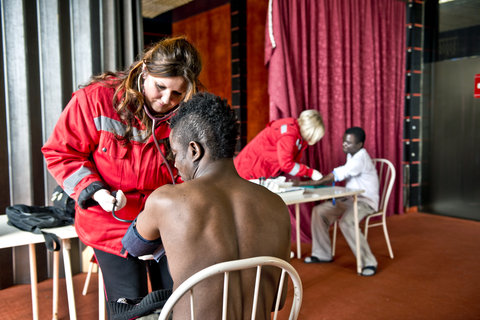 JUST WHEN WE THOUGHT WE WERE GOING TO FAIL …

Hotel “Obrenovac” is the second largest center for the temporary accommodation of asylum seekers in Serbia. It is located at the entrance to the Belgrade municipality, five hundred meters from the center. From a distance it looks almost monumental, but up close it is impossible not to notice the disrepair of the facade and the rusty fence. Behind the entrance that says that “the door of the camp for asylum seekers in Obrenovac closes at half past nine in the evening” is a dark hotel lobby. To the right is a lobby filled with circular benches around a rickety tables. From the beige upholstery sticks out a yellow sponge. The voice of SpongeBob is heard from the TV, and from the direction of a table next to the window reaches an Arab rap music. Several dark-skinned young men expressionless watch cartoon, while those by the window talk quietly. Five policemen and one policewoman are sitting at a separate, central table. “Back, back . Nobody can get out. Sima, tell them to stay there, the doctor is coming”, says Marko Opacic on the English to a blond girl. She nods and with a list in her hand goes to the room in which are a few young men. Opacic is the manager of the temporary center in Obrenovac and in accordance with the rules of the Commissariat for Refugees and Migration does not speak to the media. The manager of the hotel “Obrenovac”, Bozo Buzejic is in the mood for conversation: “What are you saying for our asylum seekers, huh?”, says with a smile. “we are in restructuring for several years now and on the verge of survival. Just when we think that we will fail – something happens. This last thing that happened is holding our nose above water”, says Buzejic. The hotel was opened in 1983 and has 105 rooms. Pools and spa center at the source of sulfuric water that is near, were planned to build around him, but it never happened. Therefore, the hotel today can boast, besides accommodation and organization of celebrations, with a “guarded indoor and outdoor parking”.

“After the insurgency that happened, whether was directed or not – do not want to go into that – they called me from the municipality and asked if there is a place in my hotel, because all those people who spend all day on the bus had to be placed somewhere. They gave me the number of the State Secretary of Ministry of Interior Bozovic. I called him, introduced myself and told him about the accommodation capacity. He said: ‘Great! I come to see it.’ After he saw the accommodation, he was pleasantly surprised, saying that is excellent”, said Buzejic. Price for the accommodation and three meals is not according to the pricelist of the hotel, but it is the same as the Commissariat pays to the Red Cross for the space of the Center in Bogovadja – eight euros per person. Following the procedure, which was accelerating with getting a date to start negotiations with the European Union, the Government of Serbia made the decision to temporarily accommodate asylum seekers in the hotel the day after the riots. Management Board is exempt from residence tax, and that “temporary” still lasts, in other words, the contract can be extended for three months.

About how the new guests were accepted by the community of Obrenovac, manager of the hotel “Obrenovac” says that there were not problems. “They are no different than the average Serbs. It is all within the boundaries of something to what we are used to. There are those who ask me ‘Who are these’, but most of them were well received. People also collected things for them”, says hotel Manager.

While explains one of the guys that he has to go on the examination even though he makes a face as if saying, “I’m afraid of needles”, Sima from Syria talks about her asylum road experiences: “When I was in Greece, rightists were coming once a week to beat dark-skinned people in parts of cities where the asylum seekers gather. People here are much better. When a woman gave birth here, everyone find out about that and started to bring diapers, clothing, baby food. The same goes for the accommodation and food. This is paradise.” Sima, otherwise, speaks five languages and here in Obrenovac helps to the manager Opacic with the organization of the Center residents. She says that does not have plan for the further:”It is good here. I would like to stay if it is possible.”

“They’ve become part of our folklore”, said one resident on a central square in Obrenovac. “Even my son no longer yells: ‘Dad, dad, look! A black man!’. We all got used to them. “I heard that the two “asylum seekers” began to train at a local football club”.

From the beginning of work of the temporary Asylum Center in Obrenovac there are 11 police officers on duty in the hotel. So far, no major intervention were required, and it is possible that it affects on the good relationship between the local population and migrants. Another advantage of the presence of the police, as insiders say, is that there is still no smugglers or illegal taxi drivers near the hotel. However, the frequency of departures of asylum seekers is much higher than in other centers. The reason for this could be that the road is only ten steps from the hotel.

Since November 2013, when it was opened for asylum seekers until the end of January 2014, through the hotel “Obrenovac” has passed 213 asylum seekers. Most of them are Syrians (58), Pakistanis (55), Somalis (41), Nigerians (29)… In the Commissariat for the Refugees and Migration of the Republic of Serbia say that they are satisfied with the cooperation with the hotel “Obrenovac”. “There were problems in the attempt of placing the asylum seekers in the workers’ barracks outside Obrenovac, but since they were placed in the hotel, everything is all right”, said the Commissioner. Otherwise, the new facility in the state ownership, which could solve the problem of permanent accommodation for asylum seekers, is required for already two and a half years. For some time it has been mentioned the military barrack in Mladenovac as a potential site for accommodation, but the renovation works could not be carried out due to local disputes. Asylum seekers are currently accommodated in five centers – Banja Koviljaca, Bogovadja, Obrenovac, Sjenica and Tutin. The number of accommodation places is about 600, which currently meets the needs of the Commissariat.