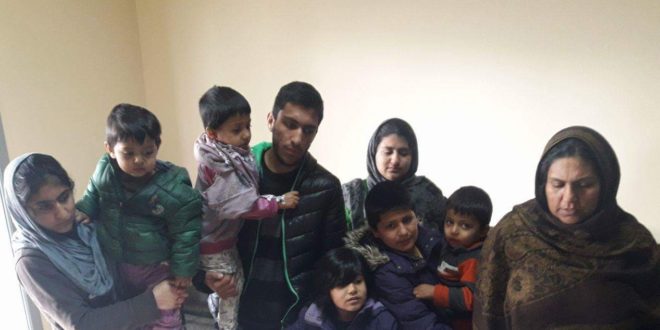 How Croatian Police drove little Medina to death on the line between two borders?

Another child has lost her life on the difficult refugee path to one of the promised countries in Europe. Six year old Medina, a girl from a large Afghan family, was left ten days ago to lie on the track of the Sid-Tovarnik railroad track, near the border, only hours after she had crossed into Croatia.

Medina was hit by a train, as the family and their accompaniment Hado, a migrant from Morocco, testified after the Croatian policemen intercepted them back to the railway line, pointing out the light in the distance and saying the Serbia was over there, and that they had to return.

They did not help at the mother’s request to wait until morning with 5 young children and two teenagers. Their pleas and explanations that they want asylum likewise did not help the situation. They were thrown into a dark and cold night, where the only signpost to Serbia was the railroad and the light in the distance. They did not tell them that trains ran along those tracks and that they had to be careful. It did not matter to them. It was only important to turn them away and that they don’t stay in their country. But soon, a train had come across them. Half-asleep and disoriented Medina was unable to get away fast enough.

The testimony of Medina’s mother and her fifteen-year old brother Rashid, as well as Hado’s, are more than shocking, not just because they speak of the young girl’s death, but of the complete absence of compassion and respect for human life.

,,We attempted, my mother, my twin sister, Medina and my younger sister and three brothers – one is seven, another three and the youngest a year and a half to come from Serbia into Croatia 21.11.2017“ says Rashid, 15 years old.

“A refugee from Morocco Hado, was also with us.  We wanted to go to Zagreb. We had  heard that families with small children do not get deported to Serbia by the Croatian police, and will take us to Zagreb.”

However, the police, as Rashid said, had intercepted them, and said that they had to return to Serbia, wait a month and only after that they would let them through.

„It was evening. We asked only to stay until the morning because we have small children, but they did not let us,“ says Medina’s mother.

Their accompaniment Hado testifies that although they said they wanted to seek asylum, they put everyone in a van, opened the door after 10-15 minutes and pushed them out.

“They threw us right next to the railroad. It was too dark, and I noticed the European Union flag on a small house next to the railway, and next to the house there were some kind of boxes and things for electricity,” says the witness.

He says the girl got out of the van half asleep and walked by herself. They did not walk more than a hundred meters when the accident happened.

,,We heard the terrible gusts of win and jumped aside. I held my youngest Amir in my arms and Rabin by the hand who was unable to breathe. When the train passed Rashid, he illuminated the railroad with his phone and saw that Medina was lying face to the ground. Her head and face covered in blood. She was motionless.” Says the face burried in the palms of the heartbroken mother.

Hado, as is said, was the first to pick up the little girl and began calling for police.

When the ambulance arrived, the mother and Rashid, who speak English, said they were begging to go with Medina, but the doctor did not allow them.

„They brought us back to the police car and locked the door. Rashid had asked where the ambulance was headed – for Belgrade or for Croatia. They initially told us they had taken her to Belgrade, but later, that we had to ask the Serbian police”

Soon they were handed over to the Serbian police at the border, who led them to the police station in Sid. Afterwards, accompanied by an interpreter they headed to Belgrade, because they thought that Medina’s body was there, or that they would arrive to the city and could bury her there.

They were accommodated, Rashid tells us, in the Krnjaca Camp.

„We slept there for three nights, and then a car from the Commissariat for Refugees arrived one morning and we were told that we had to go to Sid, where the Croatian border police would hand us over the body of Medina. We wanted to bury Medina in Belgrade, because are people who know us here. We wanted it to be by our customs and rituals, but they said we had to do it in Sid,” says the resigned mother.

They did not meet with the border police, Medina’s body was placed in a chapel at the cemetery, and what had particularly affected the family was that the young girls face had not been cleared of blood. She was lying in the same clothes, blood, torn, embedded, like a discarded doll.

They still wished to go to Belgrade. It was significant for them tosay goodbye to the young girl with a circle of people around them that knew them, who belong to their culture. Who cared for the girl. In Belgrade, our team of psychologists was even more helpful. They needed to hear words of comfort, but they could not.

„They said: everything you want to do, you must do it here. They brought us four bottles of water and said that if we wish we can wash the child and that we have to bury her in the coffin they provided, which is not in accordance with our culture. We did not have a choice. They told us: if you do not do it here, we will put you in prison, and the rest of your family will be sent to Afghanistan, ” Rashid said.

Medina’s family is now in Principovac. They do not, as they say have any documents about Medina’s death. The Serbian police, they say, said that their Croatian counterparts did not give any papers regarding this accident.

A small mound at the cemetery in Sid is the only evidence that Medina existed. That she lived. That that small, she passed through thousands of kilometers from her home and that she died scared and cold on the dark line between the two borders, behind which there was no one who would rejoice her or give her sympathy.

Prethodno Migrants who are outdoors in the vicinity of Sid are hungry and cold
Sledeće APC: Police to tell if an investigation has been launched into the railway death of six year old Medina