Početna / ASYLUM STORIES / Refugees in Serbia – They can’t move forward, and going back is not an option 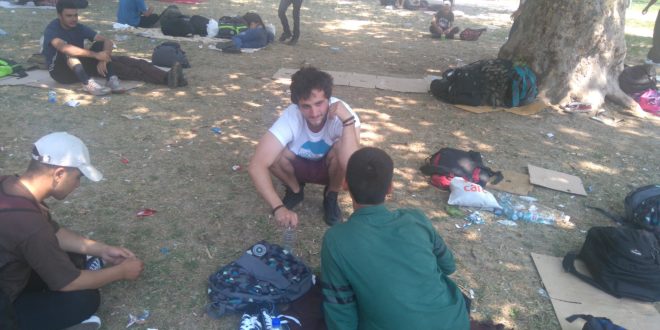 Refugees in Serbia – They can’t move forward, and going back is not an option

Bogovadja, October 20 – The borders are closed for refugees. Borders of Turkey, through Bulgaria, Macedonia, Hungary, Slovenia, Croatia, Romania are guarded by police officers, soldiers, dogs, helicopters, reinforced fences, with the announcement of new means of protection…Thousands of people fleeing wars, persecutions, misery…are being sent a clear message that there is no room for them in Europe.  Countries are making reserve plans in case Turkey abandons its agreement with the EU and stops stopping migrants heading towards Europe. Refugees are being relocated to the islands, where they would likely be further relocated.

For refugees stuck in Serbia, these messages doe not hold great significance. They set off on the road before the Balkan route was closed. Information about what is further waiting for them, they mainly exchange among themselves, relying on promises of human traffickers who they give money to for the promise of being transferred to Hungary or further… further – that’s their goal. The last major obstacle after the difficult and dangerous road that they took is crossing the Hungarian borders, which does not let through more than twenty people per day. Then they’ll easily move forward from there, they believe.

They wait in an inter-border area, in no-mans land, between Serbia and Hungary, in the reception centers in Subotica, Sid, Principovac, Asylum Centers in Krnjaca, Banja Koviljaca, Bogovadja, Tutin, Sjenica…in parks at railway and bus stations in Belgrade, on the edges of the city…

– “I have to go further. I can not go back,”says Ibrahim from Afghanistan. With six children and a wife, he left to find refuge. He says, it was not because he was looking for a better life.

-I am a wealthy man. I have 200 sheep, 20 cows, four camels…but we could not leave our house anymore. Every day shots were fired, this somewhat lost man tells us at the Asylum Center in Bogovadja. He does not believe that there is an issue with getting to Germany. His cousins are already there. After all, the man who brought him and some other people told them that there would be no problem. He has been in Bogovadja for more than 20 days, has entered the list for asylum seekers in Hungary and is waiting.

And Aham, a thirty year old construction worker, as he introduced himself to us, Hazar from Iran, with a three year old daughter Nazanin and his wife, waits. He can’t go back. Everything he had, he gave for this journey. He headed towards Switzerland. Seven months ago. That’s how long he’s been traveling. Had he known that the borders would be closed he would have thought twice about beginning his journey, he says, despite the very difficult situation that members of his ethnic group in Iran have. – “I exposed my child to great suffering and risks” says the caring father concernedly – “But now I have to go further. In Switzerland I have my close family members. They would accept me, I would get on my feet quickly.”

How he will go further, he does not know, or does not tell us. Most of these people who have been left with a few dinars after the long and expensive journey count on the illegal cross of borders with smugglers.

Everyone has their own story. Some of them are true and some are not. People sometimes feel the need to make the life they left behind a lot more beautiful than it actually was. Fatima tells us how she was a hairdresser in Kabul and earned herself 100$ a day, but her brothers and her relatives were already in Germany. So she left on her journey.

She is somewhat relaxed, open to the conversation. She seems adamant that she will get where she wants and in having a clear plan. But three Syrian woman beside her with five children, who were not up for much conversation. One of them has a sick baby. She complains that she does not understand her sister. Every hour she calls and asks why  she is waiting and not coming. She explains to her, and tells her how she was on the Hungarian border but because of the baby she returned to the Center. The sister does not understand that she can not easily cross the border and has to be put in inhumane conditions even with the baby.

-“It hits me hard that she has no idea what the situation is like and that she just keeps repeating that its not a problem that they accept me in Germany. And I somehow can not explain to her that Germany is far for me,” – says this young woman who, with the other two Syrian women and their children, is listed on the list in Bogovadja and waits.

Everyone here is waiting, and waiting is like a disease. It kills will and adds discouragement. Because almost all of these people have passed a very tough journey to Turkey, and further across the sea to Greece, through Macedonia, or from Bulgaria, where the border guards and the police are extremely cruel…she believes it is on purpose. We’re trying to animate these people. We talk, bring in positivity to the situation, we confront them with the situation and the possible exits. Nineteen year old Muhammad saw us as a spiritual rescue. He is from Kabul. He speaks excellent English, instantly making us aware that education is important to him. As if the Hungarian will open the border on whether or not he convinced us of his progressive intentions. He tells us that his father studied in Moscow, that he held function the former government, that everyone in the family was educated. He wants to study.  He is looking for an opportunity to learn, he says, that he is educating himself, and that he wants to return to his country when the regime changes there. He tells us about the horrible treatment of women in Afghanistan. He takes care of his sister who gave birth in Bogovadja. He travels with her and her husband believing that they deserve a chance. For a normal life.

Two days after our meeting in Bogovadja, he came to the APC/CZA office in Belgrade.  In Bogovadja they were told that they were on the list of migrants who should be crossing at one of two border crossings to Hungary. Muhamed d0es not know how and whether this list is in function, how much he will wait, and how with such a little baby will they make it under clear skies…he worries. He plans to go alone, to figure out the situation…

We can not help him. He will try at the border, and if he does not succeed, he will likely find a smuggler. They are here, somewhere around them. I that does not work…he doesn’t know. Few among these people are thinking clearly about it. That final decision is brought by circumstances that do not depend on them.

And the circumstances are uncertain. More and more migrants are in Serbia. About 4,500. All campsites and asylum centers are full. Blockades at the border are getting tougher but few of them intend to give up. (From February of this year, 52 refugees returned from Serbia to their country of origin – 16 to Morocco, 14 Iran, 9 Iraq, 5 Algeria.

Most escaped from death, persecution and destruction, and it was too difficult, dangerous and expensive to travel so far and then to just turn back. These are the stories of people who do not know how to go further, and for which going back does not exist.