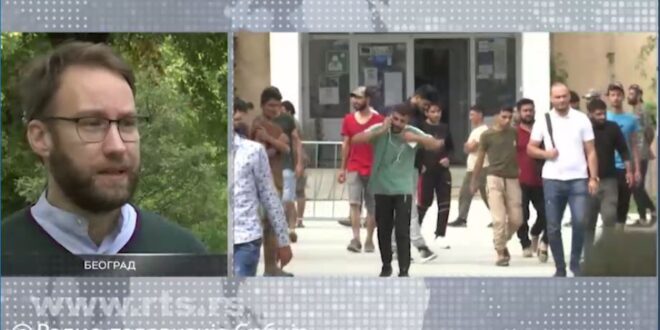 Belgrade, October 17, 2022– After two years of a lull due to the pandemic, the number of migrants in our country has increased in recent months. More than 86,000 of them have been officially registered since the beginning of the year, and the situation is similar in the countries of the region.

Comparing to the last year, the number of registered migrants in Serbia has doubled, when around 43,000 were registered. The largest number of them come from Afghanistan, Syria, Pakistan, but also from the countries of North Africa.

“The number of people in our country is increasing. We have over 10,000 people at the moment, in total in the country,” emphasizes Đurović.

Radoš Đurović, the director of Asylum Protection Center, tells RTS that the camps in Serbia are full.

“Very often people reside outside the camps, in the surrounding areas, in hundreds and even thousands.” In Preševo, over 1,100 people are in the camp, 50 people are sleeping outdoors. On the other hand, in Sombor, somewhere between 600 and 700 people sleep in the open, around the camp, and the camp is full. The situation is similar in Subotica, so we are witnessing a difficult situation, which threatens to become a humanitarian crisis if we do not increase the accommodation capacities,” Đurović points out.

According to him, the capacity of camps in Serbia is 6,000 places for summer conditions. That is somewhere between 4,500 and 5,000 beds of sustainable accommodation at the moment, and almost all the capacities are full.

Speaking about the route where the refugees are making their way, Đurović explained that they still come to Serbia mostly from the south, primarily through North Macedonia, from the territory of Kosovo, and Bulgaria.

“Those are the main ways in which people come to us, and then the migration goes either towards Bosnia or towards the Serbian-Hungarian border, where people are massively trying to cross the border at the moment, and this has been the situation since the beginning of the year. Although the Hungarian border is fenced along its entire length, although there are significant Hungarian forces, both police and military, which control the border, it is actually the most permeable border, which indicates that this kind of fight against migration does not produce results on the field,” explains Đurović.

Prethodno Increased number of refugees entering Serbia
Sledeće Đurović: In 3-5 months it will be possible to introduce visas for the citizens of Tunisia, India and Burundi