Početna / GALLERY / VIDEO / Đurović: In 3-5 months it will be possible to introduce visas for the citizens of Tunisia, India and Burundi

Đurović: In 3-5 months it will be possible to introduce visas for the citizens of Tunisia, India and Burundi

Being a guest in Day Live N1, Radoš Đurović from Asylum Protection Center said the message of European Commissioner Ilva Johansson that in the case of non-compliance with the Union, the suspension of the visa-free regime for the citizens of Serbia is not excluded – a little more complicated. The capacities in Austria and Germany are overstretched, and a wave from Ukraine is expected, that was recognized, so a meeting and an initiative were launched, where policy harmonization is sought, and later the condition of regulating land migration is added, it is unlikely that Serbia can do anything on its own.” , he said.

Prethodno Camps for refugees insufficient, serious humanitarian situation
Sledeće Đurović on the increased number of migrants in Serbia, reception centers and the abuse of visa-free regime 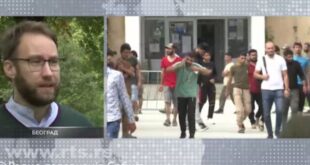