Today in the afternoon hours, local citizens from Obrenovac and asylum seekers accommodated in Hotel in Obrenovac, but also those asylum seekers who were in the vicinity of the same hotel due to lack of accommodation, were transferred to the primary school “14 October” in Baric because of emergency evacuation and the flood wave that entered the hotel and disabled further functioning of this facility.

We could not get in touch with asylum seekers last night because mobile networks were not working, and today we immediately upon receiving information about the evacuation in the village Baric went there and got acquainted with the situation.

More than 170 asylum seekers are located in the school.

Asylum seekers are well, and on dry. No one was injured, although we have a few cases of colds and diarrhea who received medical assistance and infusion. Among accommodated asylum seekers there’s also children and women, as well as pregnant women. They all are taken care of now, and the evacuation was carried out by the police and the Commissariat for Refugees.

Asylum seekers were given water around 5 pm, and the food shortly after. They did not eat or drink from the evacuation, but things are much better now. 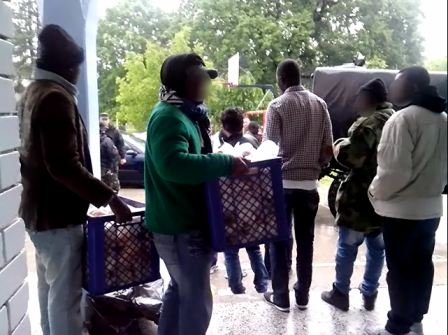 However, it is still necessary to deliver food, water, but also warm clothes and shoes, as most of them left everything in the hotel, as well as blankets, mattresses and hygiene. There is enough food for one meal, but we expect supply during the night.

The efforts of the Commissariat are evident in the field. We hope that the Crisis Staff will respond as soon as possible. So far, the biggest help to the asylum seekers was provided by the local community in Baric, local ambulance in Baric, Health Center Obrenovac, as well as citizens of Baric who have voluntarily offered help and support.

All are now in the same problem and it is clear to both sides, the squall weather does not elect and only together we can overcome this terrible situation that befell the country. According to the unofficial information, we received notice that one person died in the vicinity of the Hotel Obrenovac, but identity of that person is still unknown. Now it’s up to the police to find out what really happened and whether this information is correct. We have not received any official statements and according to reassurances of the administration of the center, everyone from the list of Hotel Obrenovac are accommodated in the primary school in Baric.