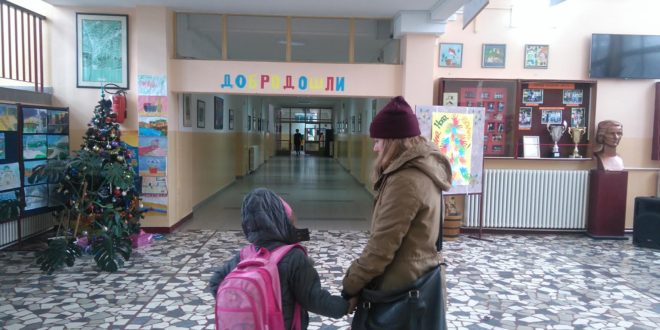 Belgrade, January 25 –Aisha is seven years old and for a few days now, she can not sit still in her refugee room in the asylum center in Krnjaca. Walking with her father and mother, showing them drawings with for them, unknown names – Milos, Sara, Jana, Tijana…Laughing at the whole room and expecting a reaction from, various people, telling them about new, to them unknown, friends, about her teacher…

Aisha is from Afghanistan. She is in Serbia for three months already with her family – her father, mother, five year old sister, three year old brother, and during their refugee journey of more than half a year in Macedonia, six months ago she got a baby sister. Aleksandra is her name. Everyone is now in Krnjaca and they hope to one day get to Germany.

Aisha’s father traveled and visited several countries. He is married to Jasemin’s tutor. They have three children. When life in Kabul became too unsafe, he decided to go to Europe.

Here they are, halfway. Stuck in Serbia and waiting away their lives.

But Aisha can not wait for her new life to starts. And her father agreed. He decided that with the assistance of Asylum Protection Center (APC/CZA) they enroll her into school.

For the first time this little girl entered the primary school “Zaga Malivuk” in Krnjaca before the New Year. The students were preparing a masquerade, probably the first one Aisha ever was a part of. With enthusiasm, curiosity and without fear, she watched from the disguise of the other children, and the director of this school, as so many times before, accepted with complete understanding to enroll Aisha into the school.

As soon as the break was over, Aisha and her translator and social worker went directly into the second grade. They were welcomed with open arms by her friends and her teacher Ratko. In Farsi, her mother tongue, the presented themselves, wrote their name and prepared gifts…She was happy but also saddened that she had not written her name, and after an entire day in her refugee room in Krnjaca she drew and wrote messages for her friends and was taught how to introduce herself to her friends in the Serbian language.

And the class is filled with great enthusiasm, everyone wants to learn Farsi, but most of all, Mia because she is sitting with Aisha…

What an exciting event for a seven year old girl who has only been looking at the worried faces of her parents and accompaniments, and centers, borders and police officers for more than a year…She finally entered the world that she belongs to as a child. School, crayons, notebooks, pens, poems, teachers, friends…

For the first few days she only went to school for two hours, but then she cried to her father to let her stay as long as the other children do. For the teacher Ratko, it may be more work but he does not regret it. He practices mathematics with Aisha for two hours. They do not need an interpreter for that.

Aisha is still here. Among us. Because there are such good and dedicated people who work at Zaga Malivuk school in Krnjaca, because there are such wonderful children in the elementary school, whose parents taught them goodness and friendship, Aisha’s life has received a little bit more joy in it. Smart and goodness. She deserves both joy and having a future.