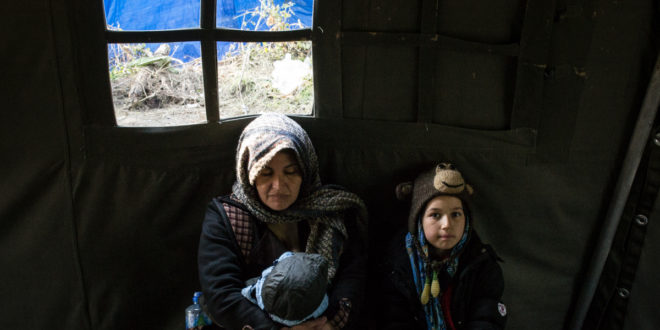 In Adasevci – Women refugees, suffering without a voice

Adaševci, December 24 – It’s hard to understand how hard the refugee journey is and how much trouble is faced by people fleeing from their countries of violence, deaths, who cross thousands of kilometers, across mountains, in unstable boats over sea, are crawling through fences, fleeing border police, falling into the hands of traffickers who are often lying to them and fishing them for money.  Some of these troubles, the confessions reduced to the bare information where they come from and the number of border transfers people tell us when we meet with them in reception and asylum centers in Serbia.  As you look at these people, you often think about who it is hardest for – the adult men who care about and hold the fate of the whole family, the immodest seniors who do not have the strength or will to persevere on the road to “better life”, children who have more hope than strength, or women, mothers, girls…who are from the beginning, considering the culture they come from, are predisposed to follow the fate of the family, suffer and do not ask questions. There is no ranking on this list in an objective order, but it is certainly not easy to be a women, and even less to be a refugee women.

In the reception center in Adasevci, which accommodates about 1000 people, who we meet with daily. They are from Syria, from Afghanistan, Iraq and others, the conflicts of the affected countries in the Middle East, Asia and Africa. Some of them went on their own journey’s without male accompaniment, with underage children and babies. They go through a long and dangerous route with smugglers and sometimes open up about these experiences. They are met with threats, intimidation, violence…Most of the women crossed the Mediterranean and then, as they say, they will walk for several days to the border of Serbia.

Zahra is from Afghanistan. Her husband is already in Germany, but she, with two minors aged 17 and 14, and a 4 year old son, waits to cross the border. The journey crossed was difficult and painful. She is not sure if she would have the courage once more to sit in rubber boats that had once moved them from Turkey to Greece.  She says this is the most horrible experience of her life. On her phone, she shows pictures of the rubber blow up boat overcrowded with people, that transported them from the shores of Turkey. She does not count the days, she does not know how much time she was on the island, when she came to Thessaloniki, and then moved to Macedonia. She remembered that she had been “walking through the jungle” for days at the crossroads of Macedonia and Serbia. She’s here now. “Just to keep the children alive and well and bring them to Germany,” she repeats as a mantra, deeply concerned that she will succeed in accomplishing this task.

It’s not much easier for Asya from Syria. She travels with her husband and six young children and shared the burden of responsibility with him, but in the center where she shares a room with another family, without any accompanying things, the possibility of joining into the life of the local community, its hard to begin a life, provide children with any kind of joy and interest. She does not think about herself, she tries to please her husband who is worried about the what and the how.

Ragat is 30 years old and comes from Iraq. She and her husband and two children were housed in a tent. Her younger son Ali (10) is sick, lacking mobility and falling behind in development. She does not leave his side all day, she calms him, tries to make a few steps with him in a small and cool space, she lifts his spirits up. They complain to us about the fact that they are accommodated in a tent, and not in one of the rooms that are intended specifically for families with children.  She’s worried and scared. The tents are only heated a few hours at a time in the evening.  Marsal from Afghanistan has the same worries, with two young children and her spouse. She worries how she heard that it would be even colder in Serbia and the soon it will begin to snow.

Young girls also have their own troubles. In the phase of growing up, they would need to be in school, receiving an education, and their days are spent in large tents where there are up to 200 people without hot water, in cold beds that are rarely washed, and almost never get changed. Rubina (13) and Mursal (17), sisters who traveled with their family from Afghanistan and who are housed in one of the tents tell us that they are on their journey for one year, in which they spent 8 months in Greece. They are in Serbia two months already. They last went to school more than a year ago and do not know when and whether they will sit back on a bench again.  They hope for a better future, and they would like to participate in the campsite in the workshops or learn some of the foreign languages they needed more in the countries they had traveled to. They eagerly end the conversation and their mother calls them to have a German language course, that is being organized by an Iraqite in a motel hall.

A large number of women in Adasevci have leg and joint wounds from their long journey on foot.  Razia from Iraq is, for example, injured in the leg and has a cast up over her knee. This detail in the campsite in which she has on availability, and besides also being pregnant is a toilette, which is not at all insignificant. On the contrary this is an insurmountable problem for Razia. After our intervention, an agreement was reached with a woman who had a room with a bathroom that Razia could use their toilet. This is just one example of the strong female solidarity that is present in the camps.