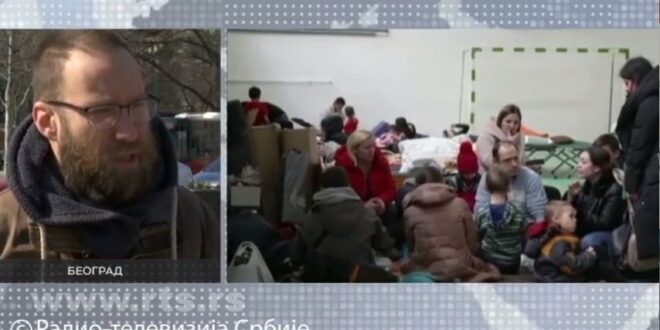 Belgrade 03/02/2022 -The largest number of people escaped from Ukraine to Poland, Romania, Slovakia, and Hungary. Several hundred refugees have also arrived in Serbia and for now are mostly staying at relatives and friends.

Director of Asylum Protection Center, Radoš Đurović tells RTS that this is the first wave of refugees and that there are no problems for Serbia yet.
“Most people remain in the countries of the European Union that are the neighbors of Ukraine. Depending on the hostilities and the overall response of Europe, we have to be ready for some unforeseen situations as well,” Đurović points out.
He believes that the capacities of Serbia are not sufficient to respond to a larger refugee crisis at the moment.
“We have about 6,000 places, about 4,000 are already filled, we can increase them by another 1,500 to 2,000 places, but that must not be our answer and preparation for this kind of situation. We need to reach at least 10,000 places just set aside for refugees from Ukraine and for the worst scenario,” Đurović points out.
According to him, a new wave of refugees is already happening because more than 700,000 people left Ukraine in six days.
“If the hostilities continue and there is no agreement and peace, it is realistic to expect between five and seven million people to leave Ukraine,” says the director of Asylum Protection Center.
The Commissariat for Refugees of the Republic of Serbia announced that all free capacities are on standby and that, if necessary, they will be put at disposal.
Link: https://www.rts.rs/page/stories/sr/story/3398/rat-u-ukrajini/4723422/ukrajina-izbeglice-srbija-azil.html
Prethodno Half a million people have fled Ukraine since the intervention began.
Sledeće Đurović: One million refugees from Ukraine is just the first wave in Europe, we appealed to the Government of Serbia to prepare