Početna / CURRENTLY / Response of APC to TV Prva’s Broadcast from 05.11. 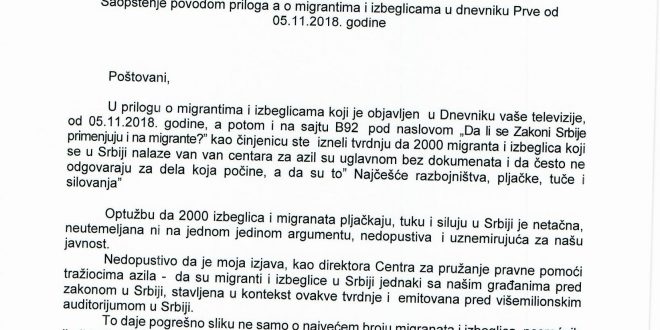 Response of APC to TV Prva’s Broadcast from 05.11.

Press Release on Migrants and Refugees in Journal Prva from 05.11.2018

In the broadcast on migrants and refugees published in the Journal of your television, from 05.11.2018, and furthermore on the B92 website titled “Are the Laws of Serbia Applicable to Migrants?”, as a fact you stated that 2000 migrants and refugees who are in Serbia, outside of Asylum Centers and who are mostly without documents are mainly responsible for acts committed – those being “most commonly robberies, beatings and rapes”

The accusation that 2000 refugees and migrants are robbing, beating and raping in Serbia is inaccurate, unfounded and not based on a single argument, unacceptable and disturbing to our public.

It is unacceptable that my statement, as the Director of a Center providing Legal Assistance to asylum seekers – that migrants and refugees in Serbia are equal to our citizens before the law in Serbia, were put into the context of this claim and were furthermore broadcast across a multimillion-dollar auditorium in Serbia.

This gives an incorrect portrayal of not only the largest number of migrants and refugees, the unlucky group of people who do not in the slightest deserve such a qualification, but also of me as the director of an organization that consistently defends their rights.

I ask of you – to provide the case of rape committed by migrants since 2015 that is being brought into question? Indicate who, when and where migrants and asylum seekers were beating and robbing?

Do a few incidents’, that are primarily amongst their own groups, of fighting, thefts of money and food from households near the Hungarian and Croatian border, or entering vacant cottages … categorize an entire refugee population of which a large number of minors and children is consisting of, as a robbing, and violent group?

By law, journalists and editors are obliged with due diligence, prior to the publication of information containing data about a particular incident to verify its origin, accuracy and completeness, as well as using the found information, ideas and opinions to be conveyed completely and authentically.

I would like to also draw attention to the citizens of Serbia to whom you sent this message, who show a great deal of understanding to the suffering of these people, they continuously show compassion and humility. They do not view this group of people in the same light that your television, through your address, have unfortunately, attempted to present them in.

In accordance with the law, I am politely seeking you to post my response in the show where the controversial issues were broadcast, as well as on the website where the text “Are the Laws of Serbia applicable to migrants?” is posted.