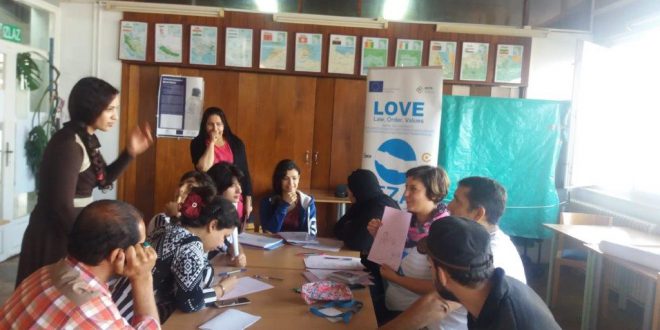 Iranian Asylum Seekers Wish to Integrate As Soon As Possible

Banja Koviljaca / Bogovadja, November 11 – Amongst the refugees and migrants we’ve met with in recent months at reception and asylum centers, a significant number of families and young people from Iran are present.

Most of them have decided to stay in Serbia.

At the Banja Koviljaca Asylum Center, where within our LOVE project, we organize integration workshops, we met with a large family from Iran. A mother, her two sons, five daughters and two grandchildren arrived in Serbia a few days ago from Ahvaz.

They belong to and fall under the Arab national minority and as a result of political issues have had to leave their homeland.

Upon their arrival in Serbia, they took some time to realize that their intended goal of reaching Western Europe would be difficult to achieve – that smugglers seek large sums of money that they do not have, and that they are at higher risks if they try to go on their own across multiple borders where they will not be welcomed with open arms … but rather the contrary. With this in mind, they decided to stay in Serbia. They sent in their application for Asylum and waiting for their ID cards.

They are as soon as possible hoping to get used to and adapt to their new surroundings.
After getting introduced and  getting to know each other, they look at the offered illustrations to carefully choose which one is best represents them. All chose joyful pictures, symbols of freedom – a bird leaving a cage, a white dove, door opening up to light. They support each other, and confirming everything that each person discusses, with a mixture of joy and sadness in their eyes.

They discuss their lives in Iran – about studying, how they worked… 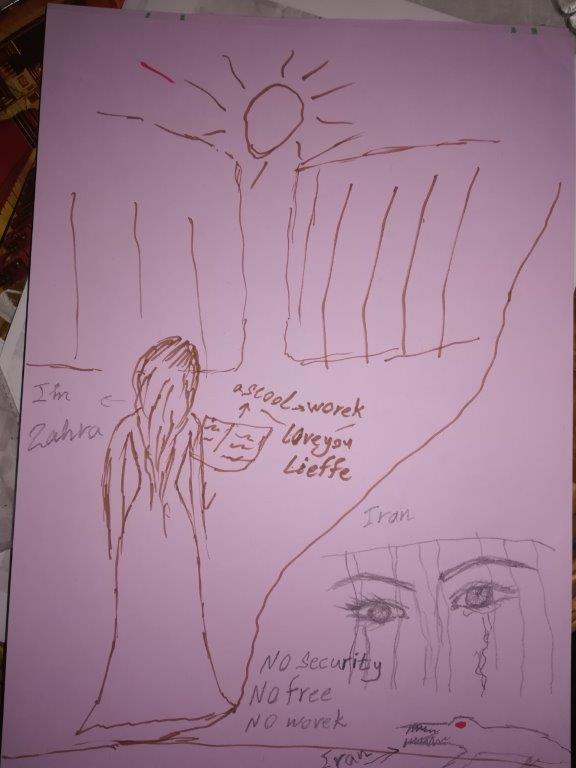 We attempt to bring them closer to the environment they arrived in, discussing how the citizens of Banja Koviljaca view refugees, quoting positive and motivating examples. We commend and praise their joys in life and their desire of fitting into the local environment.

These are very modest and joyful people, who appreciate every encouraging word, and listen carefully looking forward to our next workshops. They want to see Banja Kovilaca, meet new people and interact with new faces.

They have decided to stay. Within the camp, and on their own, they are learning the language. Their applications for asylum are currently being process. They are awaiting their ID cards. In order to prepare photographs for their ID cards, they need to go to Loznica. With the photos and their trip to Loznice included, they need about 50 euros. That is a large sum of money for them. As the least that we can give, we take the pictures they need…so they don’t have to give money towards that.

But they are full of enthusiasm. They say they will patiently wait the nine months needed to receive the right to work, and then they will figure it all out. They believe and have faith.

In the meantime, they follow all of the activities at the Center, wanting to be included, and to learn…

Just like Sajid. He is 34 years old. And in many ways he is different from other refugees and migrants who arrive in Serbia. He brought a bike and a tennis racket with him, and speaks about how he played tennis in the Iranian league. We met him at the APC office in Belgrade immediately upon his arrival in the city. We helped him to obtain a registration certificate and to, according to the instruction of the police, go to the Reception Center in Vranje. As he had not entered the asylum procedure within fifteen days, he contacted us to help him do it alone, which is enabled through the new Law on Asylum. We also assisted him in submitting his application, and to also get transferred to the Asylum Center in Banja Koviljaca, and already through his first encounter with us, he used all his strength to fight for his new position within a new environment and community.

In the center, he immediately began attending Serbian language classes, where he is taught three hours a day. He is constantly seeking some form of engagement, and wants to meet the young people of Banja Koviljaca.

He’s hurrying to fit in. When he realized that he would not be able to go further in his journey, he decided to accept this and do everything necessary to somehow organize his life in this new environment. It is very important or him to get acquainted with the local community in order to fit in. He was overjoyed when we took him to the Youth Office in Loznica. He says it was his happiest day. He signed up for their affectation campaign, and to soon hold tennis lessons for children from Loznica… He believes and hopes to even find a job.

And two Iranian families who are housed in the center in Bogovadja have similar hopes. They too decided to stay – a father and his 14-year-old son, who had converted Christianity, and for that reason claim they had to flee Iran, alongside a family with two daughters. Both of these families were accommodated in the Bujanovac Reception Center and we were able to help them transferr to the Asylum Center in Bogovadja and to begin their Asylum Procedures in Serbia.

They speak of how they want to adapt, how they have the will to work and to learn. They show off notes and notebooks, proud of what they have already begun to learn in Serbian. We encourage them to think and write simple tasks that may help them make good use of their time. They eagerly await their kids going off to school.
The expectations of these people are very modest – to be together, that at some point they find a job, building friendships and keeping their family healthy and functional.

Their desire and will is great, but we unexpectedly found out that since their arrives, approximately five days, they have yet to receive towels and hygiene products. That has become very hard for them. Helplessly, with mixed emotions of shame and sorrow they ask if we can help them.

We bought towels and sent it for them, but yet, 20 days after our visit, they all have not yet received in the Asylum Center the shampoo and soap – and the supplies that they did have, they have used up.

We encourage them to persevere, to be aware of their responsibility in learning and adapting to local culture, we encourage their initiatives, and support their efforts but it is very difficult to maintain the morale of these people and their positive energy if they are consistently humiliated, as their journey towards a normal life begins with bizarre things as minor as soap, towels and underwear.

And those minor things for them, means a lot. And is important.

Prethodno Response of APC to TV Prva’s Broadcast from 05.11.
Sledeće Research and policy brief on the health protection of migrants, asylum seekers and refugees in Serbia