Početna / ASYLUM STORIES / Rahima, who wanted to escape her suffering with death was saved by hope 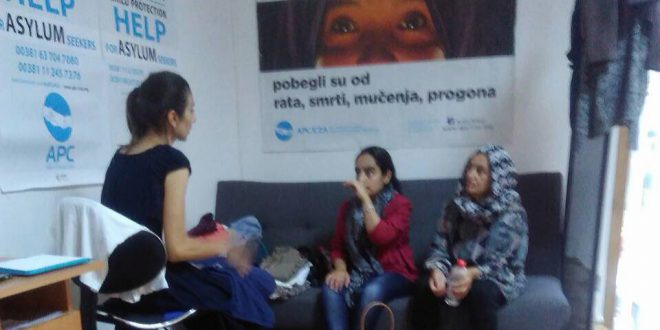 Rahima, who wanted to escape her suffering with death was saved by hope

Belgrade, October 19 – We first met 19-year-old Rahima in mid-July this year when, in front of the refugee camp in Subotica, she came out to talk with our team that visits every day to provide legal and psychological help to the people who are staying here.

Very quiet and withdrawn, she immediately brought attention to the sadness that seemed to radiate from her and her seemingly tired eyes. She looked much older than what she was.

Alongside her mother, Jamila, the next day she knocked on the door of our office in Subotica. She mentioned how she had not been sleeping for months as a result of constant fear and nightmares. In the safe area of our office, she opened up her soul to us and told us her life story.

Rahima was born and had spent her childhood with her mother, father and brother in Jalalabad, in the Ningrahar province of Afghanistan. Her father has his own little tailor shop, where he worked every day and that had been for all of them, the only source of income. Her older brother Amir went to school every day, something she herself had dreamed of doing. Their peaceful life was occasionally interrupted by explosions, but like everyone else living in Afghanistan, they somehow managed to get used to it. However turmoil in their family began to arise when one day her brother was getting followed and stopped by unknown people, with weapons in their hand and crude terrifying looks.

“It was the Taliban who were asking Amir to join them. They appeared more and more often, and then one day they had come to our house. They threatened: If next time, Amir does not come with them, they will kill us all” Rahim said, still disturbed by the memory.

Her father, she said, had to make a very difficult decision to send Amir as far away from the Taliban as possible. That is how Rahima’s brother, at only 16 years old, had left his home, his family and Afghanistan. He was lucky enough to have made it to Sweden after a tough and long several month refugee journey.

The life they had been used to was no longer possible. After he brother’s departure, her father had fallen ill, his heart had weakened, and he could no longer work as he had before. Her mother Jamila lost her ability to sleep, and with him, she lost her calmness and strength.

“Everything began to fall apart. I had to help but I did not know how. My father decided that we should leave, that we must reunite as a family. He sold his shop, we packed only the most important things and went into uncertainty. That was three years ago. My father said that people we paid off would lead us, and that we should not worry, that everything would be okay.”

But nothing was okay. Their refugee journey turned into hell. Sometimes they walked all night on foot, sometimes were in cars, crammed in with other refugees, forever hungry, with little water they received and shared amongst themselves. Smugglers switched shifts, as did the countries through which they slowly passed. The worst for them, was in Bulgaria.

“I thought we would not survive, I wanted us to stop, to give up, to disappear…they locked us up on a house and boarded up the windows while threatening us not to talk so that the local people would not accidently hear us and inform the police. We spent three days and nights in the dark, with only a little bit of water that we had to share. There were about 40 of us in the group, refugees from all sides. For my parents, it became very bad. I was scared for them a lot, and I did not even think about myself. I just wanted to survive and get out of this house …”

Rahima’s mother’s condition was worsening, should could no longer differentiate between reality and imagination, she often yelled and cried, which particularly aggravated their smugglers who were constantly threatening them to have silence. At one point, the door opened and the smuggler told them they had to leave as soon as possible, that they had been discovered and to just run towards the forest.

“I was walking faster and faster, crying, my clothes falling off of me, that I could not stop and pick up. My mother, surprisingly had strength to walk fast, however my father had to take breaks because of his heart problems. A smuggler at a running pace came towards us and began beating our backs, telling us to go faster or they will leave us there. In those moments, something inside of me burst and fell apart.

I stopped crying. I stopped and grabbed my father by the arm. Let’s go, I said. The border is close, let’s go. We must…”

A smuggler once more hurried Rahimi, threatening again that they would leave them behind for slowing them down, he pointed out the border and said: “…my job here is done.” She did not know what the price they paid the smugglers was as her father had dealt with that. But the price they paid had been much bigger.

After coming to Serbia, they felt that for a moment, their troubles came to an end. As a group they headed towards Belgrade, from where they were sent to the nearby camp. After examination, her father received treatment, as did her mother, but she …

She could not at first understand what was happening to her and why she felt that everything had changed, she did recognize herself, how she could not feel joy or excitement.
Over time, feelings of anxiety, fear and panic began to appear more and more often, especially at night. She was never alone in a room, but almost every night she was awakened by nightmares covered in a cold sweat, unable to understand where she was and whether someone would hurt her or her family. She was always ready to flee. She was 17 by the time she arrived in Serbia.

“At one point, I could no longer endure this fear, the horror … Like a cage. Death seemed to be a salvation for me. I swallowed all of the pills my mother had. But she found me, I was unable to disappear, to run…forever. The next day I was regretful, I could not leave my parents, but these feelings are too heavy…after speaking with the psychologists, I too received my own therapy, medicine that is supposed control my feelings of horror, so I can at least get some sleep and rest. And honestly, after a couple of months I felt better, or I should say – I was feeling less, of anything.”

After a year and a half in the camp near Belgrade, Rahima and her parents were taken to a transit camp in Kikinda, where they were later transferred, after 5 months, to Subotica, where we ended up meeting. At the time of our encounter, Rahima was only 19 years old, though she looked and spoke as if she was at least twice that age. In an underlying tone through our conversations, you can pick up on her continued prioritizing care for her parents, while brushing aside her own self-concerns. It’s as if she feels she does not matter, as though she has lost herself somewhere.

At the end of her story, Rahima cried. Our support to this young girl meant a lot. Our conversations, with a side of warm tea, the fact that someone was listening and trying to understand how she was feeling, how she wants to look at her situation more positively, which reminds her that she is okay and alive and that hope does exist…all of these aspects…were healing. Little by litter, she uncovered that there are a number of things that make her happy, but also, that the situation in which she is in, and that the lives of her parents are not in her hands. We encouraged her to have hope, and to believe that things will change, that she must have patience.

She came to our office two more times, and the words she left us with were:

“Maybe soon, it will honestly get better, when we cross over into Hungary. Maybe our refugee journey will end soon, although it’s still hard for me to believe that…Thank you from the bottom of my heart on the hope you shared.”

Rahima went to Hungary in August. We got word from her, from a closed camp with a short and simple message and a picture of a heart:

“Everything is okay. Thank You.”

So short, but in fact such a significant and big message.