Početna / CURRENTLY / EUROPE AND MIGRATION / Migrants take care of migrants, but also of the Germans

Migrants take care of migrants, but also of the Germans

Migrants in Germany very often live without occupation and without perspective. But now, those who want can finish biannual course for social assistants. It is about education of a staff that is needed for the care of elderly and sick.

The number of migrants in the German retirement homes as well as the institutions for care of the elderly and infirm is on the rise. It is about immigrants of a so-called first-generation who managed to get a new home in Germany, but have maintained their customs, cuisine and habits from the old country. Many of them have never managed quite or very well to learn German. Their arrival in the previously mentioned institutions, can often be a problem for the staff because the migrants are in many ways different from the Germans. Caregivers, nurses, social workers are therefore referred for additional help. That help that they can get in the future from the young migrants. 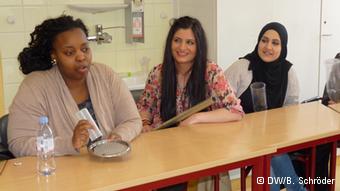 Attendees of the school “Paulo Freres”

The “Center of survival,” common name for the network of various humanitarian and social organizations, has recently started with a new educational program in the school “Paulo Freres” in Berlin. It is about the education of a young migrants who have recently arrived in Germany and who have often have difficulties with finding jobs. This program of education provides them an opportunity to acquire a profession (state recognized diploma) of a social assistant with an emphasis on care of the sick and elderly. The training lasts for two years and it is consisted of the theoretical teaching as well of the practice in the homes for the sick and infirm.

New perspectives are opening up for young foreigners

One of the attendants of this new program is a 25-year-old Afghan, Najib Jacobi. He conducts his practice in one of the local social institutions in Berlin’s quarter, Moabit. His “clients” are, among others, pensioners of Turkish origin. Jacobi is spending time with them , for example, exercising their memory on such a way that they must to alternately translate the names of animals, from Turkish to German. Although the Turkish is similar to the Uzbek (Najib’s mother tongue), Najib Jacobi has to look into the dictionary during the preparations because of the differences between these two languages. He is more than satisfied with his work in this institution. 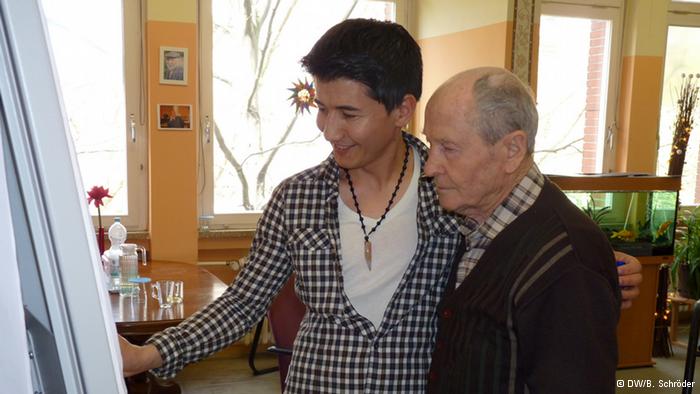 Najib Jakobi with his “client”

“I grew up with my grandmother. She took care of me and I can still feel and convey further all the love I got from her. Also, I like this work because I am working with people. I prefer my job much more than working in the office, in front of the computer, from which you cannot hear a word”, says Jacobi. He was 14 when he came alone, without a family, from Afghanistan to Germany. He had to wait for the permit for unlimited residence in Germany for many years, but now he finally has it and with it has the perspective in finding jobs and in reaching his occupations.

“So far we have offered only the basic courses of care that were not recognized by the state. However, now we finally have the opportunity to offer the right education and the profession to our students”, says director of the school “Paul Freres”, Marc Hahn. Also, he adds that students can, continue with their education after completing two years for two more to get a degree in caregivers. “In any case, they are very much in demand. I think this is the appropriate solution for the problem of the lack of manpower in the field of care of the elderly and the sick”, says Hahn.

currently 45 students, age between 17 and 40 years old, attends school “Paul Freres” . Most of them are of Turkish, Kurdish or Arabic origin, but there are those who came from Kenya or Brazil. They acquire knowledge from the field of care of the sick and elderly but also from general subjects such as German or music education. Bearing in mind the severity of their life stories, the school also provides them with additional programs and counseling they can get from social workers or lawyers who are specialized in regulation related to foreign citizens.

In most of the cases, practice is carried out in institutions that belong to the Berlin’s firm for hospital management “Vivantes”, which is also the coordinator of the project. In these institutions everybody is usually very satisfied with the students but from time to time something uncomfortable can happen. “There have been cases that elderly, suffering from dementia, were irritated by the arrival of an African student. It can also happens”, says Marc Hahn, while adding that the attitude toward discrimination is also one of the topics in the classroom. “One of our most important goals is to strengthen our students to be able to oppose racism, to perceive themselves as they actually are and to empower them to say: “I’m here, I learned something good and I want to do something for patients as well as for my German colleagues. I have a right to be here, to live in this country because this is my country”, points out Hahn.

After two years of study, almost half of the students want to continue with their education and to acquire a profession of caregivers. Bearing in mind such a positive experiences, there is already a plan for admission of one hundred students per year. “Our goal is also to offer a solid foundation to migrants so they could be able to finance themselves and provide themselves a safe living income while living in Germany”, says Marc Hahn.