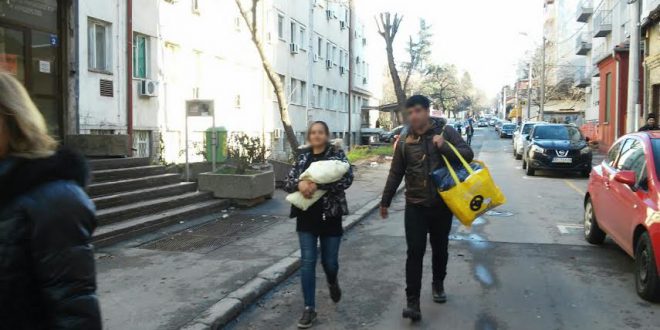 Little Marko Sadat was born on January 10 around 5am in a hospital in Zvezdara. His parents, 21 year old Afghans, Atefu and Erfan, were very happy. He’s their first baby. But it would not be a refugee story without involving drama, and as such, was Marko’s coming into the world.
A young couple who fled from Afghanistan fled to Iran, and embarked on their journey to Germany, having stopped in Belgrade last saturday. Because Atefina was pregnant they decided to spend the night at the Center in Krnjaca, so that they would rest a bit, and the next day continue on wards to Sid and further…
They arrived in Krnjaca in the evening, where they were then separated. Atefa house in a women’s barrack and Erfan in a mans. The doors of these facilities are closed at 10pm. Around 3am that evening, the young woman began to give birth. The women who were in this room with her, from Somalia and Nigeria, were left in Belgrade as they were unable to go through as economic migrants, but they too will be giving birth soon and will get the help they need.

Nobody heard them. Other women came from the neighboring rooms, and all the noise was appealing, but their voice could not reach the people from the Center’s security, which is located in another building.
Then Atifina’s friend from her a room, a Nigerian woman, suggested that they draw the grate from the window. The joint forces did it and she jumped out of the window and ran for help.
The ambulance arrived in half an hour, Erfan already awake, they were rushed in and soon they all rushed to Zvezdara where Marko was born in about ten minutes.
Yes, that is his name. Marko from Afghanistan. His father whom we took to the municipality to take out the birth certificate, without which we can no longer go on, by the way, how he and his wife decided to flee from Afghanistan in which they have no future, decided that they will live in Europe. “We agreed that we will adapt to all customs and values in Europe. Atefa as soon we headed on our journey took off her Hijab, and decided to give the child a European name…we want a new life!” Erfan told the story.

We remind him that when he came with us after the birth to see his wife and child, that he did not kiss Atefa, which is normal in Europe, to which he responds: “But we hugged each other! We can not get used to it so fast…little by little…”Erfan who walked back from Zvezdara to Krnjaca, is confessin that he can not possible take away the thoughts of what could have happened, that for example, what if a fire broke out in the barracks.
Now attached to one another, full of enthusiasm and hope, like all young people, enjoy at the moment of happiness and probably already know, that tomorrow they will be on their way.
And they, like all other refugees, escaped to close the borders. That’s why they’re rushing.
To not lose their dreams.

Prethodno Would you like to help refugees?
Sledeće Afghan baby at the Institute for Mother and Child in Belgrade