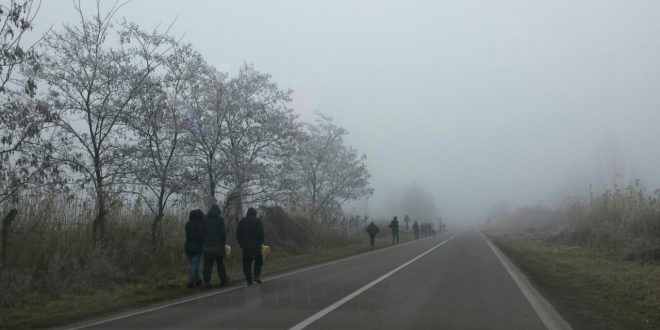 Belgrade, November 6 – More than 5,700 migrants have been accounted for in Serbia since the beginning of the year, of which almost 4,800 have expressed their intention to seek asylum, while against more than one thousand people, have been submitted misdemeanor reports for the unauthorized cross of state borders, according to the data of the competent authorities. Joint forces of the army and police engaged to protect Serbia;s border with Macedonia and Bulgaria since its formation in late July, preventing about 22,000 migrants from entering the territory, police director Vladimir Rebic recently said at a gathering in Vienna.
The borders of our and other countries in the former Balkan route, which we passed through by more than a million refugees in 2015, are also protected by international teams of police officers, including members of the Serbian MUP.

With the closing of the route in early 2016, the influx of migrants to EU countries has been reduced, but on the other hand, according to Hans Friedrich Scheider, head of the UN Refugee Agency, Serbia this move created an environment in which smugglers make millions of of refugees and migrants.

Smugglers have been taking advantage of unhappy and frustrated people for decades, but now news has traveled with such speed, in the establishment of a multinational smuggling networks and their recklessness, says UNHCR head in Serbia for Politika.

“Smugglers today use social networks to sell their services to migrants, often forcing them to spend thousands of euros. Recently, we learned that the price of smuggling of an adult asylum seeker from Iraq to Germany through Turkey, Bulgaria, and Serbia has doubled from 4,000 to 8,000 euros,” Scheider explains.

He recalls that a research team was set up to search hundreds of sites on social networks in search of smuggling ads to people.

“These ads falsely claim to be able to bring migrants to any European country. They are guaranteed to receive asylum in their destination. Such publications are similar to ads for common goods and services, and smugglers claim that their offers are 100% legitimate and affordable,” our accomplice explains.

The fight against smuggling is commendable, but the “treatment of symptoms” of smuggling, according to the head of the UNHCR in Serbia, will have little effect if the root causes of the phenomenon make this crime so profitable.  Cooperation between states in the fight against smugglers and human trafficking, often organized in international criminal groups, is also important, as well as strengthening cooperation between states in the area of reulations, family relocation programs and family reunification, refugee assistance and readmission..

“A heavy blow to smugglers will be given when refugees get protection, and migrants return home. Instead of destroying all victims in a vacuum marking them as irregular migrants, countries must make a difference between refugees and migrants. This is crucial if we want to protect refugees and migrants from criminal networks, reduce their reliance on smugglers and the situation of abuse and deaths in the future,” Scheider said.

The number of refugees has been drastically reduced in relation to 2015, but still refugees and migrants are trying to find their way into a better life.

“In September 2015, the image of a lifeless body of three year old ALan Kurdi from Syria caused massive reactions that have prompted many people around the world to take action. Two years later, hundred of children like this little boy continue to desperately attempt to cross the Mediterranean in search of security, protection or a better life in Europe.  Since then, at least 8,500 refugees and migrants have drowned or disappeared only in attempting to cross the Mediterranean, and among them were large numbers of children,” say Scheider.

Prethodno Meeting in Vienna: The Refugee route through the Balkans continues to be in function
Sledeće Migrants who are outdoors in the vicinity of Sid are hungry and cold