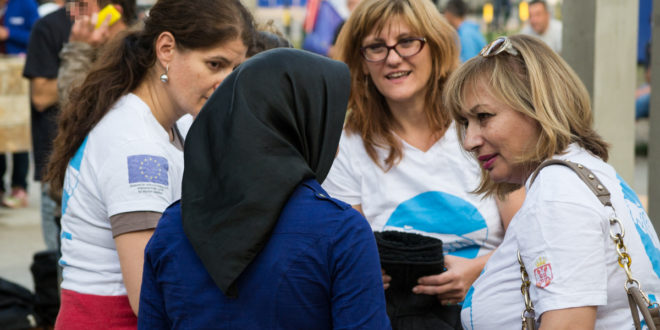 Jamila’s flee from her husband and fear of the future

Bogovadja, August – Jamila is a single mother from Afghanistan. We met her for the first time half a year ago in Bogovadja. She seemed lost with her three sons by her side, but she accepted to speak with us. In the beginning however, she was a bit fearful, but she slowly began to let us in.

-“I’m glad I do not have a daughter. It’s not about loving boys any more than girls, but I would not be able to watch how she would be going through what I went through. You asked me when is it okay for a girl to marry, you said.”

– “I almost want to answer with, never. They married me off when I was 12 years old. I remember that everyone was happy and excited, but my heart was stiff. All of a sudden, everything changed – I stopped going to school, I moved, all around me I listen to tips about “how to be a good wife”. But I do not even know what that means. on the other hand, I think, maybe it will be nice, who knows, everyone around me is celebrating, it’s impossible that they are all wrong about it?  It was terrible. I had my first son a little before I turned 14 years old. Can you imagine? I became a mother, when I myself, needed a mother. I was not ready for it at all. And neither was my husband, he was barely 2-3 years older than me. He did not even know what to do with me. He was very quick to punish me for everything that bothered him. A slap for every wrong word, a slap for every time he was nervous or on edge.  He did not care to choose whether it was done in front of the children or not. His mother knew, but she did not wish to get involved. I did not dare to say anything to my parents, and anyway, they would not be able to do anything about it.  And all of this lasted about 20 years,” she tells us, “I know, I look and feel older but I am actually only 31 years old. He left at one point. He left us, and I used this opportunity, and ran away with the kids,” Jamila confessed at each of our encounters.

We listened to her, encouraging her that she made the right decisions, that she did not commit a sin against her children. We advise her to speak to the boys, to show them that she is their support and to help them become independent. Little by little we are making progress.

She tells us that it was not easy for her and even now thinks about if she had made the wrong decision.

– “And then I remember all of the hits. That’s why I told you the if I could choose, I would never get married. I’m trying to teach the boys to think differently. I do not want my sons to be like their father. For now it’s going well. They love going to school, and hanging out with other kids. I worry about the eldest though, he did not really have me as a mother, I was too young. But I’m trying, and because of that I left. Because my life is over, but theirs is just beginning

Jamila is still with her sons in Bogovadja. They have a much better relationship now, they are more responsible and show more respect to their mother. They hope to go further, we continue to regularly visit them.