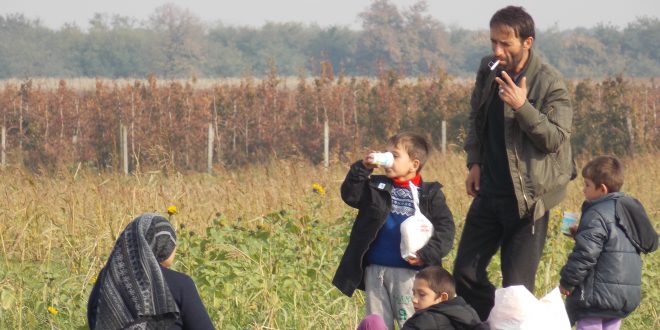 KRNJACA, August 2018 – Husein still sees the scars on his body and soul. He is from Kurdistan. He’s been in Serbia for a few months, but his escape from conflict and his journey towards Europe lasted much longer. (English version below)

He is constantly wondering would he have began the journey had he known what was waiting for him on the path, especially considering how much humiliation he had endured.

He doesn’t sleep. Afraid of the possibility that his decision to go to Europe will tear apart his family.

He feels the need to talk – from the beginning:

“We had to leave, it was unbearable. Everywhere around you everything is falling apart.  Constantly you’re thinking “God, we survived yet another day.” My wife cannot look at me, she doesn’t say anything and I know that she wants to say “Hussein, save us.” The air smells of pumice and blood. You think that you can’t handle it, but with time you get used to it.

One day, I just made the decision, to take my family to Europe. If I knew then what I know now, I would think long and hard on if we would actually leave.”

“I always tried to make sure my children do not notice that it is hard for me, that I, myself am scared. They’re young, 7,8 and 10 years old. They do not need my burdens as well. I see how they’ve changes, they’ve become more silent, they’re faces like stone.” Husein tells us that somehow they somehow came to Bulgaria. This is where his hell began, where he explains, is unimaginable.

“They kept us in a closed camp. With far too many people, all desperate, nervous, hungry. Every day you look at the fence and police with guns and dogs patrolling. It’s like we’re criminals and not refugees. They throw you bread like dogs, and even though you feel disgusting and humiliated, you stand and catch that bread so that your family has something to eat. ”

He asks if I heard about the protest that broke out there. People could no longer endure it, they started an uproar, and the police began to beat them. He speaks of the chaos that ensued.

“I hugged my children and wife and waited for it all to pass. Rage was all around us, dogs barking, people screaming.  My son said to me “Dad, you’re scared!” My heart broke, I was not able to hide it. He was terrified, he screamed, “don’t let them hurt me!” I remember the big black dog showing his teeth at him while the police screamed at us with words we did not understand. Then he hit my son in the head. Dilbar fell, and I knew that I could not do anything. I ran away from Kurdistan to protect my family, and I failed. Somehow we recovered from this and managed to get to Serbia.

He says its much more peaceful here. A feeling of security. It will take time for them to forget everything, and Husein himself is unsure if it is possible at all. He says Dilbar has it the hardest. He awakens in the night screaming, “I do not want to die!”

“At times he sleep walks, getting up out of bed and attempting to leave the room. I can tell that he’s still distraught from what happened in Bulgaria. My wife and I take turns sleeping, we have no key for the room, they don’t wish to give it to us, so I worry that Dilbar will try to leave. I try to explain it to him that here everything is okay, that nobody will attack him. And I see that he believes me. We talk about good positive things throughout the day, he goes to school, he hangs out with other kids, and seems happy and relaxed. But at night, he returns to his thoughts from Bulgaria. That black dog persecuted him.”

Husein is grateful that we visit them, that we try to engage Dilbar with interesting and positive things.

Husein is building up the strength to continue onwards. He is a father who placed the responsibility on himself for He repeatedly mentions how he must protect them, and this thought weighs heavily on him. He constantly asks himself, and even seeks answers from us on – if he made the right decision.

There is no correct answer to that question, only time will tell.

Prethodno Germany will be sending back migrants to Greece who previously sought asylum there
Sledeće APC / CZA Asylum Stories 2017.