Refugees and migrants who come from war-torn countries such as Syria and Afghanistan and trying to reach the EU via Greece are at high risk from being unlawfully and forcibly returned to the territory of Turkey by the Greek border police or coast guard. Refugees and illegal migrants who were forcibly returned to Turkey often risk being arrested by the Turkish authorities and placed in custody.

Non-governmental organizations (NGOs) do not have access to these detention centers in Turkey and therefore the provision of legal assistance to migrants and refugees is limited, which increases the risk that they will be driven back to their country of origin, where their lives may be in danger. 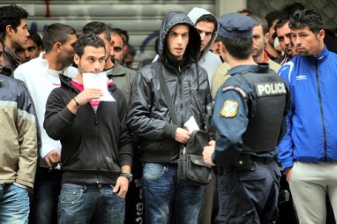 “In the first half of 2013 there have been reported many cases of forcible return of refugees from the Greek border to the Turkish territory and that they had not been allowed to apply for asylum and to examine their requests individually. This shows that the Greek authorities are employing this practice on a regular basis, despite the fact that it is unlawful and dangerous for the life of refugees”, said Jezerc Tigani, Amnesty International’s Deputy Director for Europe and Central Asia.

The route across the Aegean has become more popular since 2012 when authorities built a 10 kilometre fence on the land border between Greece and Turkey in the Evros river. Also, nearly 2,000 new border guards were deployed along the border at the river Evros in order to prevent illegal crossings.

However, crossing of the river Evros is also extremely dangerous. One of the best indicators is that over 100 people, including women and children, have drowned trying to cross the river Evros and enter Greece, from August of 2012 to July of 2013.

During the summer months, with the improvement of weather conditions, the number of people who are trying to cross the river Evros is increasing. Bearing in mind that the conflicts in Syria, Afghanistan, Somalia and Iraq are still underway, in the second half of 2013 is expected to increase the number of people who will try to enter Greece, although it is a risk for their lives.

At the same time, refugees and migrants who were caught in illegal crossing of the Turkish-Greek border face the arrest and very poor conditions of detention in Greece.

Those who made it to Greece are routinely arrested and detained in inhumane dark and dirty cells for long periods. Some reported that they were detained nearly 9 months.

“Greece needs to improve the conditions of reception and accommodation of refugees instead to perform the blockade of border crossings. These are difficult times for Greece, primarily because of the economic situation, but there is no excuse for how refugees and migrants are being treated”, added Jazerc Tigani.

“What is happening along the Greek border is a shame not only for Greece but also for the entire European Union”, said Jezerc Tigani.