Početna / ASYLUM STORIES / I have found salvation from hell in Serbia

I have found salvation from hell in Serbia

People in Syria are living in constant fear that they can be killed at any time. It is a life in which you are so afraid of death that you think you’re must’ve gone mad. There is almost no family that have not seen their closest one dying in front of their eyes. Syria – it is hell on earth!

Hassan M. testifies about the horrors of a bloody civil war that takes place in Syria in front of the eyes of the whole world for over two years. He is an intellectual from a small town in the area of Homs, a city that, with Damascus, is famous as the bloodiest spot on the planet at this time. He managed to escape the hell of a civil war and to, without turning back to the homeland in flames, seize Serbia. He is the first Syrian who is granted the asylum in Serbia.

He has traveled at night to the border with Turkey and during the day was hiding on one place motionless waiting for the sunset. In Syria, the majority of people were killed precisely on the roads controlled by the military or the rebels.

“When the army or the rebels stop passenger, they legitimize him and and may determine his religion by the place from where he comes. After that, they are testing the passengers and if they feel you’re not with them you have a guaranteed bullet”, says Hassan.

“With a lot of luck, after three days of walking and hiding, passing several military checkpoints and death squads, I managed to get out of Syria and go to the refugee camp in Turkey. Then I decided to come to Serbia, since I’ve been here before. I have friends here”, added Hassan.

Hassan speaks Serbian languagevery well. As a young man he has spent several years in Serbia. He says that he fall in love with our country and that he was planning to visit Serbia again in a few years. But, even in the darkest thoughts he could not imagine that this time he will come in front of the bombs and escaping the whirlwind of war in his country.

“People here are very good. I expect to learn some craft and improve my Serbian language. For now, it is not possible to return to Syria. I was happy before the war started, religious differences were not been emphasized, we all know who is from where, but it did not matter”, says Hassan.

“So many people are now suffering, so many people were killed or made afflicted forever. This is quite similar to your civil war during the nineties. Atrocities that are done in the name of the people and religious groups only lead to new retaliation and infest our country and society in a fratricidal war that will not stop”, explains Hasan.

The words are slowly flowing from Hassan’s lips. Images from the war-torn country are constantly in front of his eyes. Fear for the fate of his family is always in his heart and mind. Wartime circumstances in the small town near Homs gave way to a fear for life and the fear for life developed uncertainty.

“It can only be trusted to the family and some friends”, says Hassan.

“One wrong word is the fast way to death. I have lost two close relatives, many friends, neighbors and relatives …”, he added.

Hassan could not take weapons in his arms. He refused. He was looking for the way to get away. He is now in Serbia. But the real life is still on hold.

“My family stayed there. Father, mother, brother … We talk occasionally by the phone. The creeps pass me by every time when I call home. I worry about whether someone will pick up the phone. I’m trying to live like I have a purpose. I have to find job because I know that I will not return home soon”, said Hassan.

EVERYBODY ARE THE VICTIMS – The whole families, with small children, different religion, social status, education, now come from Syria. They all left their homes due to war and indiscriminate violence that did not spare anyone… They have all been victims and prey of the revenge, theft, hatred and greed… Coincidentally, almost all or the vast majority of Syrians are just passing through Serbia on their way to Germany and Austria – said Rados Djurovic, executive director of the Asylum Protection Center (APC/CZA). 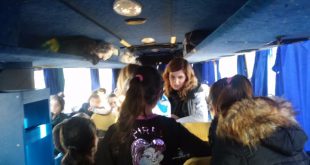 Asylum granted to unaccompanied minor in Serbia for the first time