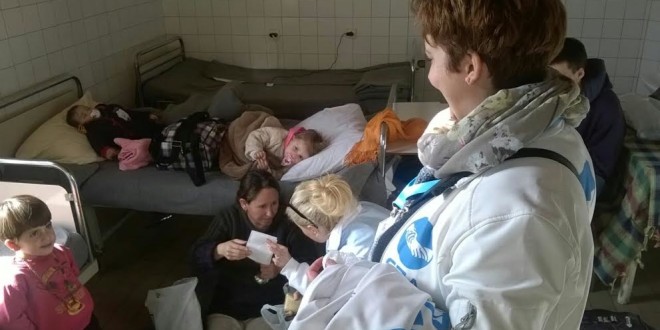 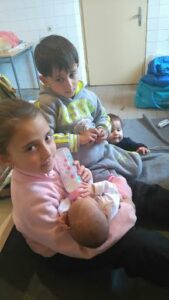 Adaševci, February 17 – Hejrat, only 5 days old, weight 2,700gr but today she began her journey in Adasevci with her mother and fiver brothers and sisters to Germany where she her father awaits. Our  APC/CZA team, alongside Gordana and Ned from the Center for Social Welfare in Sid saw them off.

She was born here on Friday, February 12, around midnight. Her mother with five children went from Iraq to join a husband who arrived in Germany four months ago. She spent two weeks with her children – each ranging in age from one to six years old, pregnant she hoped to reach Germany before giving birth. But she started around midnight on a bus in Adasevci where refugees arrived from Preševo waiting for the arrival of the train from Croatia to continue their journey. She entered the  Doctors’ without borders clinic and gave birth within a few moments. Our colleague Jasmina, who went with Juni to the doctors stepped out  to look for an interpreter, and came back to hear the cries of a child. Little Hejrat was already born. The Ambulance was called, mother and baby were transferred to Sremska Mitrovica, and there were five of her crying children in the bus. They are guided by the official traveler Samir who is trying to calm them down. Jasmina calls the Social Work Center from Sid, the social worker immediately arrives, leading the frightened and half asleep kids in the corner of the scene, gives them milk, teaches them in an unknown language, but caresses warm hands until they fall asleep. When they woke up, they were transferred to a foster family.The Nutritionist does everything to make them cheerful, but they are upset. They are too small to be able to take care of one another, do not understand the language, they invite their mother … The mother takes care of them and cries in the hospital in Sremska Mitrovica. She is  Kurdish and a translator for Arabic is not enough. Fortunately, we are the only organization in the field, to have an interpreter for the Kurdish language and we include it. From Friday until today, he has been in touch with the mother, father, children …

Finally, this morning we leave to pick up Juni and her children. Along the way we stop in Pecince. Jelena Petrovic who waits for  twin boys and is pregnant herself, found out from the patients in the hospital in Sremska Mitrovica and her baby, she contacted us on Facebook and offered everything she needed for a girl. We buy – bottles, buns, ebb, bottles, caps, hygiene … and we are hurrying to the mother. 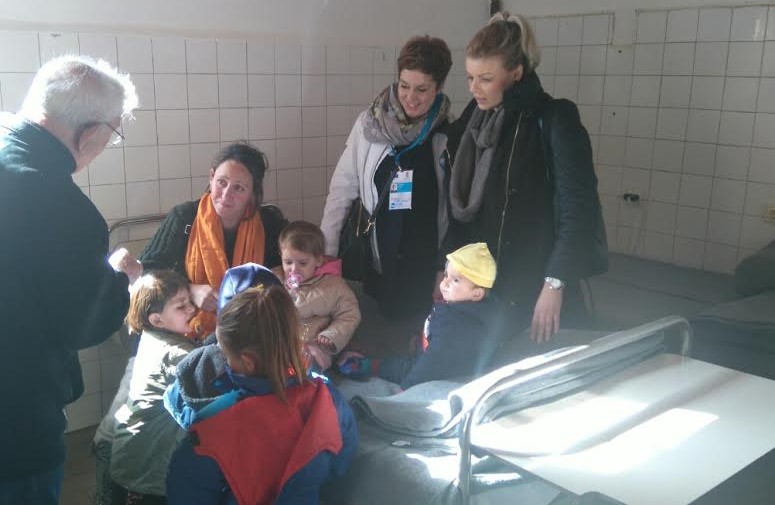 Our team meets legal formalities. We are wasting time in Sremska Mitrovica, because the girl was born in Adaševci, so our lawyers have to regulate the birth certificate there. While Juni and our lawyers in the office of the local community give data, we take care of Hejrat. We are already trained for this. Our colleague Svetlana feeds her a bottle on a swing. She’s very good and she does not cry.

But the older kids are crying. When they saw their mother in Adasevci, river strength tears erupted from each of them. Hugs, kisses,  sighs of relief … Everybody’s fading. Except Juni. She asks us whether our Svetlana will go with her to Germany. We calm her down and explain that it’s not a practice, that she will be able to figure it out on her own, that people will help her … that her oldest daughter is here to help her. 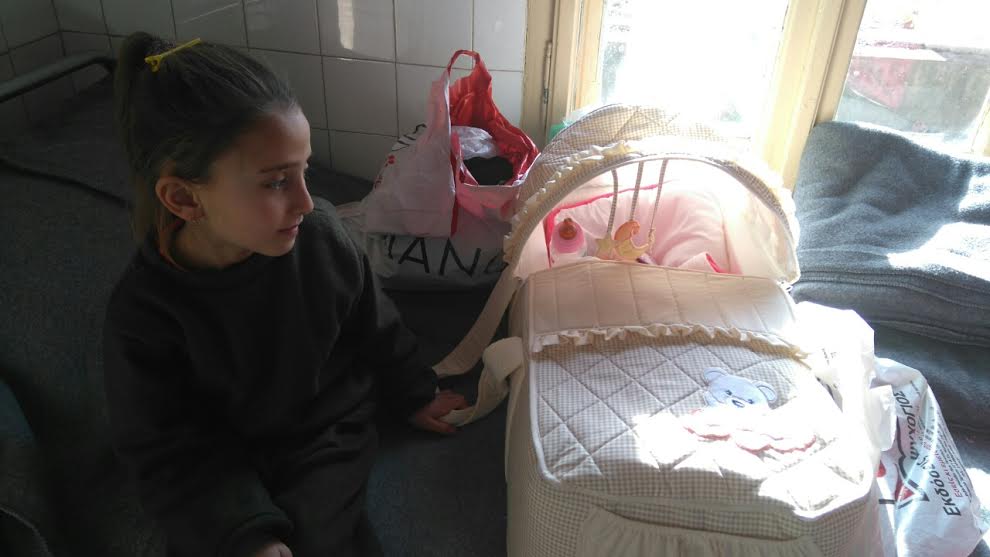 She is exhausted both physically and emotionally. That rest of the road is huge for her and her small children. We do not tell her about the ever-increasing border crossing, the return of people, waiting … We are talking to her about the train, about people who can contact for help? on the waypoints, about what to pay attention, how to keep children … We convince her that everything will be fine, she will come to her husband, have a peaceful and different life.

We tell her: “You are a brave woman,” and she says, “You are good people.”

Prethodno REFUGEES: “Better prison in Europe than Iran”
Sledeće The Sham family from Syria and their measures of luck