Početna / NEWS FROM APC / Asylum corner in the Primary School

Asylum corner in the Primary School

On March 13th, 2014, the Asylum Protection Center (APC / CZA) in collaboration with the Primary School “Mile Dubljevic” from Bogovadja organized the Asylum corner in which participated pupils from the fifth grade. Pupils were drawing various motives on the eco shopping bags, which will be later donated to local residents. On this occasion, pupils also wrote letters to the asylum seekers children.

In the afternoon hours, workshop was also realized with the asylum seekers who have drew the motives inspired by their memories on the shopping bags.

Illustrated shopping bags are part of the promotion of the decision to extend the working time of doctors in the local ambulance, which was initiated by the Asylum Protection Center, supported by local residents and asylum seekers.

Photo gallery from this workshop can be seen on  WWW.AZILBOGOVADJA.RS 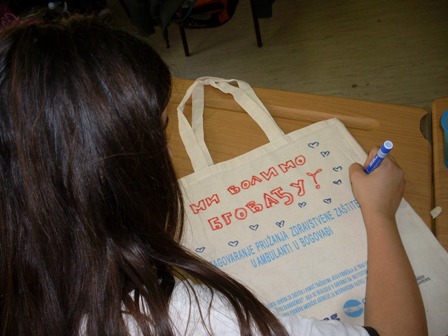