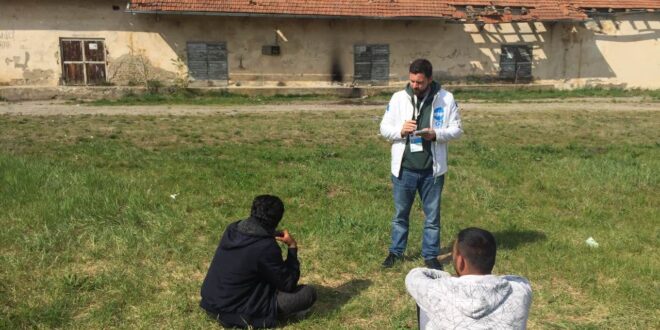 Subotica, Horgoš, Kelebija, Kikinda, July 6, 2019 – APC/CZA mobile team regularly visits border areas in northern Serbia, as well as transit and reception camps for migrants and refugees in Subotica, Kikinda, Sid and Principovac, including open locations near borders. They provide migrants with information, legal assistance and assistance with registering at a police station, obtaining registration papers with which they can be accommodated in one of the reception or asylum centers in Serbia, they can express their asylum intention, report corruption, discrimination, smuggling, crimes and human trafficking. In addition, the APC/CZA psychosocial team provides psychological assistance and empowers migrants, helping them to get appropriate health care, to obtain a caregiver if they are unaccompanied minors, to obtain social care and assistance from local welfare centers, but also empowering them to overcome their existing challenges.

The APC/CZA collects information about situation in camps, about living conditions of migrants and refugees and their treatment by camp administrations, representatives of institutions and citizens, on respect for asylum seekers and migrants, their problems, potential discrimination, violence, trafficking, smuggling, push-backs and other challenges of asylum and migration.

Through fieldwork, talks with migrants and refugees and insight into the local situation, from June 25 to July 05, 2019, APC / CZA officials identified current problems, challenges and practices in the northern areas and at the borders of Serbia. 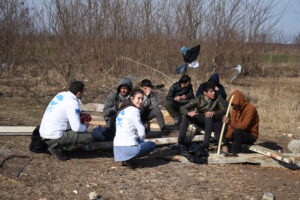 Push-backs on the Serbian-Hungarian border

While visiting open locations where migrants are staying in Subotica (train station), staff members from the northern APC / CZA office spoke to refugees who are staying in these locations and regularly trying to cross the border with Hungary, most often at the Horgos and Kelebija border crossings. А.В. (14, Afghanistan) has just returned from the border crossing with his brother M.V. (15) when the APC / CZA mobile team visited the Subotica train station on 2 July 2019. Two unaccompanied minors stated that they did not manage to get into the truck this time (as they normally do). They were spotted in the parking lot near the Horgos border crossing by Serbian police and they said them only “Come on”, indicating to them to return to the territory of Serbia. А.В. states that the Serbian border police told them nothing but to go back without any explanation or use of force. А.В. is in Serbia for a month and he was accommodated at the Institute for the Education of Children and Youth in Belgrade. He showed the phone number of the Institute, which he carries with him in case he decides to return. For now, he doesn’t want to go back to the Institute.

At the same location, APC / CZA staff members spoke with K.N. (23, Afghanistan), who stays at this location for two months (as of May 2019). He reported that during the week of trying to cross the Hungarian border, they usually experience physical violence once a week, from one Hungarian police officer who has a beard and he is the only one who hits and beats migrants when he is on shift that particular day of the week. K.N. says that everyone from this site has experienced physical violence at least once by a Hungarian police officer in question. Also, K.N. stated that if migrants are caught by Hungarian police, they are usually detained for 2 to 3 hours at the border police station, where they are photographed before push-back. If there is physical violence against refugees, the shooting takes place after the violence, according to K.M.

E.A. (17, Afghanistan), who arrived at the site in the last week of June from a camp in Krnjaca, said that he was caught by Hungarian police while attempting to cross the border at the Horgos border crossing in a truck trailer on June 28, 2019. The same border police officer described by K.N. battered his entire body in a room with no cameras, which he said was a room inside the police station at the Horgos border crossing. 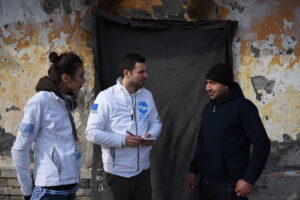 M.A. (18, Afghanistan) added that Hungarian border police officers sometimes beat migrants inside a police van after being caught and before being pushed-back. Push-backs continue to occur in the immediate vicinity of the Horgos border crossing, with police returning migrants through a small door on a fence.

According to information gathered by APC/CZA staff members, there is no communication between police officers and migrants during the encounter. Migrants do not express the intention to seek asylum.

On the same day, July 2, 2019, APC / CZA officers visited an open location near Horgos border crossing where in conversation with the migrants present there, they learned about the latest push-backs conducted by the Hungarian police. R.A. (15, Afghanistan, 15 days in Serbia, did not stay in camps), as did E.S. (15, Afghanistan, stayed in Obrenovac) state that in the last weeks of June they managed to cross to Hungary via the Horgos border crossing hidden in a truck trailer. They were then discovered by a Hungarian scanner, pulled out of a trailer and reportedly locked in a police station room at the border crossing for two to three hours. There was no communication between them and the Hungarian police during the capturing. This time they were not registered in any way. After several hours of waiting in the room, they were put into a police vehicle and after a short drive, they were thrown out of the vehicle next to a security fence at the border with Serbia. Both migrants received beatings with fists, sticks, and kicks from police. Then they were pushed through a small door on a fence into Serbian territory. Serbian police were not present during their return.

During visiting an open site near the Horgos border crossing on July 5, 2019, APC / CZA officials spoke with A.J. (16, Afghanistan) located in Horgos for the past month. He said that he was on the Hungarian border two days ago (July 3). He attempted to cross the Horgos border crossing illegally by getting into a truck trailer but was soon spotted by Serbian police officers on the Serbian side and only returned, without violence and registering.

B.M. (19, Afghanistan) reported that from this location, in addition to daily attempts to cross the border in trucks in Horgos, migrant groups also travel to Sombor, attempting to cross the Danube by boats near Bezdan.

Following a visit to an open location near Horgos, the mobile team also visited the Subotica train station on July 5, where the group of 30 to 40 refugees, mostly from Afghanistan were staying. W.K.A. (19, Afghanistan) stated that on July 4, a group of 20 persons attempted to cross the Hungarian border in wagons. They were spotted at the border crossing by Hungarian police officers, who, as W.K.A. claimed, seized their phones, photographed them and then returned them near the Kelebija border crossing, through a small door on a security fence. There were at least 10 unaccompanied minors in this group, all from Afghanistan.

At the same location, APC / CZA officers spoke with E.N. (19, Afghanistan) stating that his last attempt to cross the border was in the last week of June by getting into a truck trailer on the Serbian side of the Horgos border crossing. He was spotted by a scanner on the Hungarian side of the border crossing and his attempt was unsuccessful. He was recorded by photographing, and on this occasion, no physical force was applied to him, but he was illegally pushed through a protective fence into Serbian territory near the Horgos border crossing without any communication with Hungarian police officers. Serbian border police were not present during this push back.

Attempts to cross the Romanian border and deportations

F.A. (26, Iran) whom the APC / CZA officials also met at the train station on 5 July 2019 stated that he has been staying in Serbia for a total of 6 months. Before coming to Subotica, he stayed at a camp in Bujanovac from where he decided to try to cross the Romanian border two months ago (early May) through Kikinda. He was captured by Romanian border police, searched and stripped to bare skin and photographed. No physical force was applied on this occasion. The Romanian police then contacted the Serbian border police, who came to the scene where the migrant was handed over to the Serbian police who then prosecuted him, and F.A. has served a ten-day prison sentence in Zrenjanin after being convicted of a misdemeanour judgment.

Attempts to cross the Croatian border near Sombor

During visiting open locations near the Horgos border crossing on July 2 and July 5, 2019, APC / CZA officials also talked with migrants who are leaving for Sombor from this site, where they are trying to cross the Croatian border across the Danube.

According to B.M. (20, Afghanistan), migrants in groups of 10 to 15 people leave for Sombor from an open location near the Horgos border crossing, and then they try to cross the natural border across the Danube river at the border with Croatia. After crossing to Croatia, migrant groups immediately head north, heading for Hungary. B.M. further states that if the Croatian border police catch migrants on the Danube where they cross by boats into Croatian territory, the Croatian police immediately command migrants while they are still in boats to return to the territory of Serbia, after which the migrants leave the boat on the shore and continue their journey to Sombor by taxi. However, if they manage to cross the Croatian territory and be captured by the Croatian border police, they are ordered to cross the nearest bridge on foot. In most cases, it is a bridge at the border crossing near Bezdan. In all cases, there is no communication with the police officers, except orders from the police to return. Also, migrants do not express their intention to seek asylum when meeting police officers.

R.Z. (15, Afghanistan), met by APC / CZA officials at the train station, said that on July 1st, a group of 50 migrants from Afghanistan had succeeded in crossing the Danube river in Croatia (from Sombor). Unnoticed, they continued their journey to Hungary, on whose territory they had successfully entered, but were soon spotted by the Hungarian border police. All the migrants were photographed and then, at the place where they were caught (they do not know the name of the place), they waited for several hours before being loaded into 4 police cars (16 of them in 4 cars) and transported to the border crossing with Serbia (didn’t know to say which crossing that was). There, the whole group was subjected to physical violence by Hungarian police officers (hitting batons, fists, kicking in all parts of the body). Following this violence, they were pushed through a gate in the fence at the border with Serbia. All migrants returned to the train station on foot. Serbian police were nowhere in sight at the time of the push back.

Prethodno Large number of minor migrants on the road through Serbia
Sledeće The largest migrant center in Europe is now closed – how it will affect Serbia?