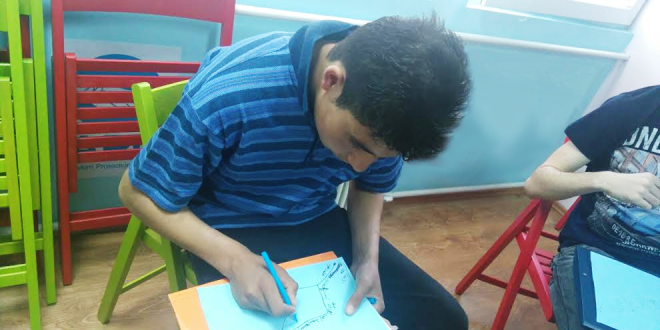 Krnjaca, 9.april – Nur only recently turned 18 years old, he is the fifth child in a poor Hajdar family from a village next to Deir ez-Zor in Syria controlled by ISIS. We met a frightened, depressed and lost boy in the Asylum Cnter in Krnjaca where he arrived after the closure of the Balkan Route. While we are speaking with him, we can not, without embarrassing humor – how this poor peasant family managed to break through the worst war conflicts through Turkey, Greece, Macedonia and Serbia only to have the borders closed.

And then you realize – the fear of the unknown is less than the fear of one’s own life in Deir ez Zora, which is located in the center of the Islamic state for three years. In their prison, the boy spent six months with his older brother, Amar. There is less fear of the journey he took with a neighboring family, with a little bit of money in his pocket, for fear of being forced into Jihadist clothing, and then taken to a location like a live shield or bait to the official government forces. That, he already survived.

– When ISIS took our village, our entire life changed. We are a poor family. Three of my sisters are married and the six of us brothers stayed with our mother and father, but we did, had our own house and were much more satisfied. But when the jihadists came, when everyday became a struggle, there was no work, no life for us anymore.  Our house was damaged, and besides, although we, my brothers and I, were all underage, we were threatened with being recruited. We mostly decided to to fall in their view, but one day ISIS assaults three girls from our neighborhood. ISIS banned women from leaving the house, and they went to the store. When they saw them, the soldiers began to shoot in the air and shout, scaring them and throwing stones at them. My brother and I ran out to defend them. They were our neighbors and friends. We stood in fron of them and then the jihadists looked at us with all of their anger building up. They threw us on the ground, kicking and hitting us. They tied us up and we were taken to prison. They put us in a big hall where there were already about 300 people of all ages. There I met a whole male generation of prisoners – grandfathers, sons, grandsons, says Nur.

– But I will never forget Mustafa. He had a son around my age and he felt sorry for me. When they first dressed us as terrorists and threatened us to intimidate their fights i attract attention so bombs and grenades get thrown on us, while they were looking for favorable combat positions, I cried and felt like I was dying of fear.  It was all me though. Mustafa made me tough. He just kept repeating – Do not be afraid! Do not separate yourself from me! He put me on the ground and shielded my head with his hands. He told me and my brother nightly – if you get out of jail, run! They have already grabbed you by the teeth! There is no life for you here! They do not forgive! They do not fear Allah either!

Mustafa taught Nur how to write. Every day, the prison wall turned into a school board and on it the young boy printed signs of Arabic letters. Thanks to Mustafa, Nur was able to within a year, of when he arrived in Turkey and got a smart phone, discovering that the whole word is available once typing only one of two Arabic letters, he managed to become fully literate.

With tears in his eyes, this boy thinks of his friend and patron, who remained in jail and of whose destiny he knows nothing about. He cries, out of fear of the fate of his family. He’s puzzled on what will happen to them. He has no contact with them, except for brokena dn indirect news he gets from a cousins. He misses his mother. He remembers her only visit to the prison. They allowed him to speak to her at the metal doors of the jail. He saw an unidentified woman in black with a whirlwind whose eyes were the only thing visible. He did not recognize her until she spoke. It shook them as much as the captivity. Her voice was trembling, she could not even talk about what was happening to them. Fortunately, says Nur, he and his brother came out of jail after six months and immediately escaped to Iraq to their sisters. The sister lived in Mosul. They spent some time there, and then they realized that in this city, there is also no peace or future for them. With a bit of money they received from the brother in law, they returned to Deir ez Zor, moved with their parents and yonger brother and decided on who would be the one leave as a refugee. There was only enough money for one. Amar was already eighteen and was in greater danger than Nur. In November last year, he joined hundreds of thousands of compatriots and headed for Germany.

After 6 months, Nur followed him. When the border was close, he came to Belgrade from Presevo. The group with which he came went onwards. He does not know how and where, but he stayed alone. He walked around the railway station and the bus station for days, then registered with the police.

Here he is in Krnjaca. He does not hang out with anyone. It’s hard for him to open up and is shy. Members of a Syrian family who is also in teh Center, who we asked to help him, encourage him, say they are trying, but that Nur is still very depressed.

He cried for days that he could not get to is brother. What is he to do now, he does not know what next. And then he calmed down a bit. We helped him. He became an adult in Serbia. He applied for asylum. He received his own ID card for asylum seekers. The first ID card in his life. It made him happy, enabled him to calm down a little. Now he can go to the city, but he is afraid. For him, the city is a railway station, he knows nothing further than that, he said that the railway line is being renovated, and that the tram 12 towards Krnjaca changed routes.

He says he will wait. He has no other choice. Nur’s life is now on hold.

Prethodno Refugees stuck on the Balkan route: Waiting for hope
Sledeće Idomeni – the first slums of the European Union