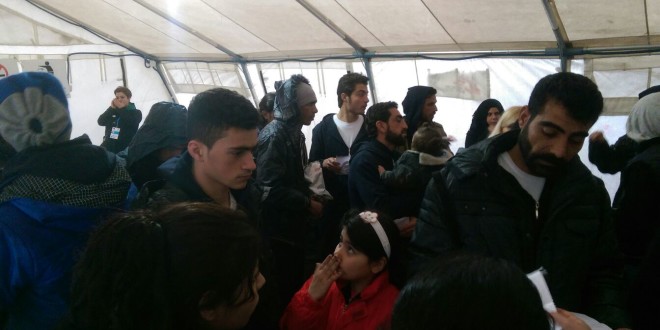 The rules on the Balkan refugee route are changing, human drama’s remain the same

Šid, Belgrade, Preševo, March 4 – While in Ankara, Athens, Munich and Brussels they seek solutions for a refugee crisis that Europe did not see since WWII, at border crossings, people are fleeing, the living faces of the crisis are suffering in their troubles. In Sid, Adasevci, Presevo, Belgrade, between the people being returned from the border and seeking to go further in Europe, you become witness to the daily life and dramas of these people. Sometimes around us are so many incidents’, sadness and fear that one starts to doubt the meaning of what you are working towards.

As the rules are changing, so too are the countries of origins of these real life tragedies occurring. First we saw the impoverished people of Somalia, Sudan, Pakistan, Algeria, Iran, Eritrea…for them the borders closed two months ago, because they had been marked as economic migrants.  We also remember hundreds of desperate faces, and everyone had a look similar to that of Ibrahim from Tunisia, when we met him, lost in front of the reception center in Sid, devastated by life.  He’s 28 years old, but looks about 10 years older. Dressed in several layers, because he owns only everything he has on, with a plastic bag in his hand, in which is also all of his property he does not know where to go.   He’s suspicious of us. We learn to find out that he has arrived from Bulgaria, that he spent two years there. He brought with him fear, and remembered the cruelty he went through. Two years in a room 6×6, with little ability to go outside, without hope, contacts…Frightened and lost. He has no money, no phone, somebody stole his bag, so he was left without his transit confirmation.

Afterwards, we met him at the railway station in Belgrade. Equally desperate and lost, he seeks countrymen about information on how to proceed. 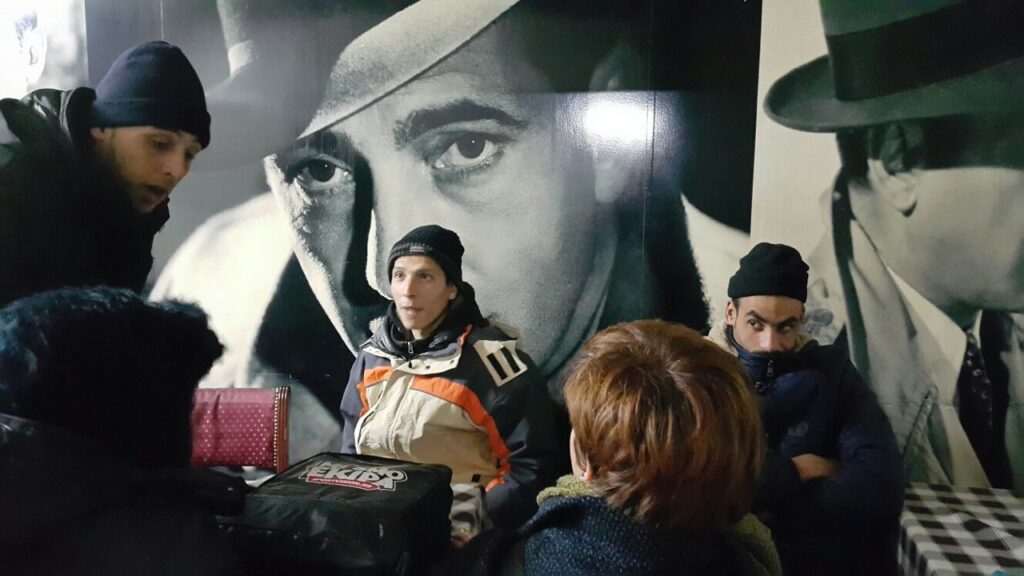 In a coffee shop in the corner, at a table with a patterned tablecloth, on which a phone is connected to a charger we find three new acquaintances. They say one is from Iran, another from Libya, and the third from Pakistan. They’ve been here for a month. One arrived through Bulgaria, the other two across Macedonia. Of course, illegally. They did not seek asylum in Serbia. They did not go this far to live in Serbia.  We ask them what they are look for. They answer with the question – do you have any suggestions? We show them the APC application on the mobile phone and offer up information on asylum procedures and asylum centers. They stay quiet. We will inform them that we will bring clothes and shoes to the park next to the bus station tomorrow. They say: We will be there. They refuse our offer to order them tea or coffee. They lower their hands to their heart and they give us a glimpse worth a thousand words – we still have our pride…

Exiting, we meet Moasam from Morocco. There is a somewhat optimistic and calming look in the 21 year olds young eyes. He is travelling alone. He shows us the confirmation papers he got we he applied for asylum in Serbia, he was sent to Tutin.  He returned in two days and now here he in front of us. He says he was the only refugee, next to one other woman in Tutin. Neither they or the people from the center could say why they were there. Now he wants to go Krnjaca. He tells us that he began his journey to Europe a month ago. He traveled from Greece on foot for two weeks. Then he was returned six times on the Macedonian-Serbian border and that he tried to cross six more times. He has only his mother and cares of nobody along the way. We ask him if he needs some clothes. He points to the sweatshirt he is wearing, with the gesture of a man who need a lot more than just a few things saying – I do not need anything. 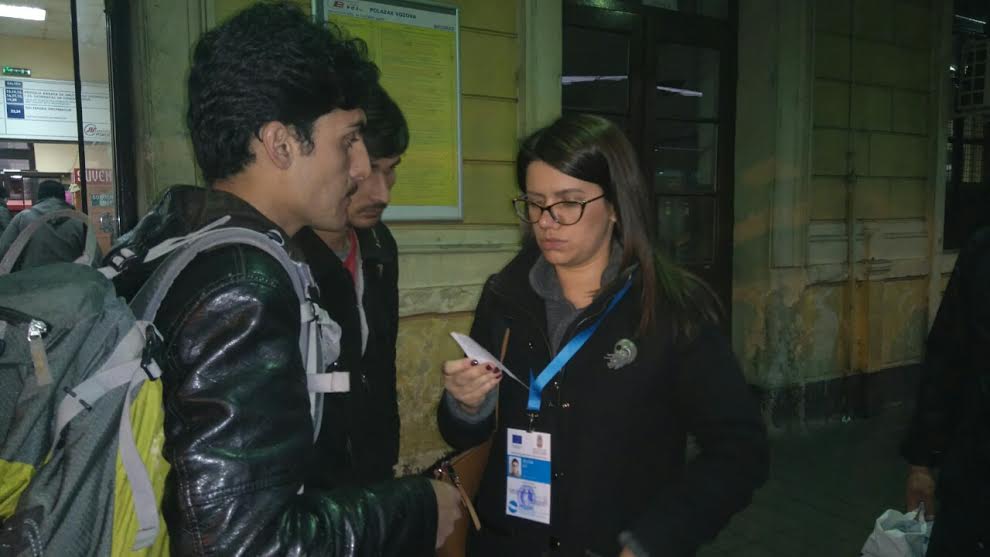 In the park near the bus station there are new faces. Afghans. Those who had, and now have nothing. When they started on their journey’s borders were open to them, the Iraqi, and Syrians. Overnight, this decision was reversed. Suddenly, nobody wanted them now. They were turned away from the Croatian border. From group to group goes a man holding his registration papers on which Sjenica is written, asking everyone he approaches where that is.His compatriots in obviously trying to provide solutions, that in spite of the obstacles on the journey forward, it is far away and that it’s just better to stay here. Saddened, he shows us that he is left without money, that everything he has on him is all he has, and that he does not know what to do next…Three more Afghans approach us. They just arrived. They say, illegally from Macedonia. The ban found them on the road. Stressing from each registration. They talk about hotels where you can sleep without documents, that the do not want to go to asylum centers. They want to go where were going when they set off on their journey and when it seemed normal and relaistic. Now that have fallen into the category of economic migrants and are looking for an alternative. They sleep in the same places always and will end up in the same holes (abandoned wagons at the railway station in Belrade), for which weeks before, had lowered their ramps two months earlier, all of them lurk the same people who would take them on, and pledge to move them further, to profit.

It’s hard for you to look at all these people, and it’s even harder if you recognize them with close faces. In Presevo, several hundred refugees who came a week ago with a confirmation from the Greek-Macedonian border of our translator Ceca, who once lived in Syria, is recognized by a neighbor from her street in Aleppo. A dashing encounter that made everyone tear up. We find out that the whole family traveled to Germany, that some of their relatives are already there … They exchange information about common acquaintances, about events in the city, about family, plans … We follow them with the desire for a lucky path.

A few days ago, we meet them again in Šid. Concerned and honest. The rules have changed. The passport of Ceca’s neighbors says they spent two weeks in Turkey. They are returned with the notion that Turkey is considered a safe country and anyone who has been in it for a longer period of time (which is not specified) returns. We calm them, let them know what rights and opportunities they have as refugees in Serbia, but they want to go further and we can not help them. It’s a bad feeling. They hide their tears, but a new problem is ahead of us. Syriac with his family are stopped, because on his regular confirmation issued at the registration on the Greek-Macedonian border, the employee forgot to put a stamp. He must go back to the border and who knows how to go over again. He leaves the family in Sid, takes a taxi and goes back to the place where he already knows. once again struggling for his future. We calm the family, we give our phone numbers of our employees in Preševo to help him. We can not do much more here. 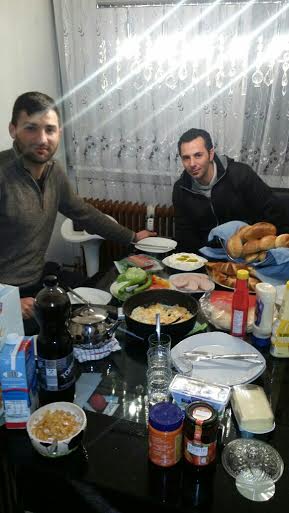 At the end of day, our Jovana, receives a message from Germany on Viber.

Two Syrian guys who were returned from the Croatian border a month ago, because the Croatian translator asked them a question about the name of the lake (which does not exist) near their city and which, after consulting with our lawyers, have exercised their rights,  from their sisters house in Germany saying, thank you and that everything will be fine. And that’s everything is okay – they started the asylum procedure, and during this time, Samir looks to continue studying, and Amar is looking to be an IT engineers.

They send pictures. A table full of food and smiles.

Joy arrived at the right moment. At the end of a difficult day and in encouraging consolation – you sometimes merely can not help everyone.

Prethodno A joint solution does not exist, everyone is trying to save themselves however they know how
Sledeće APC/CZA workshops in the “Children’s Corner” in Krnjaca