On January 21st, 2013, police of Nis has discovered 2 vehicles with 22 illegal migrants from Eritrea, Afghanistan and Syria, and has arrested one person on suspicion of having committed the criminal offense of illegal border crossing and people smuggling, announced the Police Directorate in Nis. 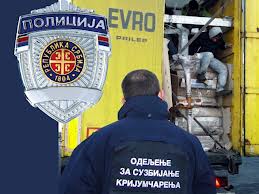 The police tried to stop one of the cars, but in that attempt the vehicle has landed off the road and the driver ran away. In that action was discovered 10 foreigners without travel documents.

According to the police report, 12 foreigners, including two children, were found in the “Opel” at the toll gate “Nais”, and driver, F. Kadri (20) from Presevo was arrested.

A fine of 14 000 dinars has been determined to those who were detained, but later it was commuted to a prison term of 14 days with a measure of removal from Serbia for a period of one year.