Početna / CURRENTLY / Panel: Serbia, in addition to being a transit country, is also becoming a destination country for migrants 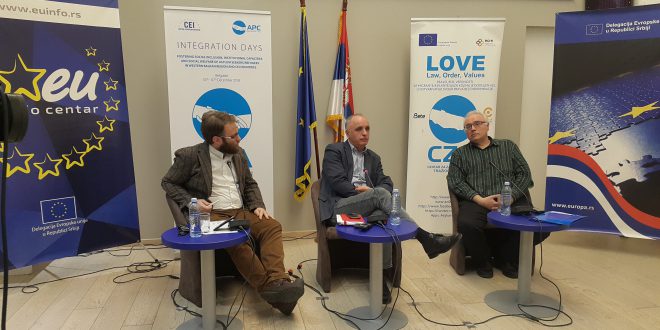 Panel: Serbia, in addition to being a transit country, is also becoming a destination country for migrants

Belgrade, December 07 – Serbia is a country that is becoming a destination country for migrants, primarily thanks to its position on the EU’s external border and the fact that it is increasingly difficult to pass the Balkan route, towards the countries of Western Europe, as was evaluated at today’s panel “Refugee Integration, Experiences and Challenges in Serbia and the EU”, held at EU Info Center.

Radoš Djurović, of Asylum Protection Center, said at that Integration of Refugees Conference, “that many asylum seekers in Europe are turned away and pushed back to Serbia” and that there are still very few in the country who have legal status.

He added that very often, even their stay in the country “does not mean certainty”, although these persons may “actually live [in the country] for years”.

“On the question of successful integration, it is crucially influenced by the media, and their coverage, while the will (or lack there of) of political actors can greatly complicate integration processes and integration planning, as is the case with many countries in Europe,”  Djurović noted.

Djurović states that ignorance and a lack of information creates a particular problem when it comes to establishing communication and local integration of refugees.

In his opinion, refugees should be familiar with the culture, language, history and laws of the communities they are entering, but furthermore, citizens of local communities should familiarize themselves with the reasons surrounding the arrival of refugees, their customs and refugee fears.

“Integration is a two-way process, and with understanding and cultural similarities, can be made easier, and this is something we should already be thinking about. First and foremost, it is important to think about the relevant agencies and institutions concerned, and to make adequate plans and strategies when it comes to managing migration,” said Djurović

Goran Novaković from the Integration Sector of the City of Vienna discussed how Vienna as a city “is very seriously concerned” with the problems migrants experience, and is aware of the challenges in creating tolerance within the local environment.

“It’s no longer a matter of choice, it’s better to start planning, because the circumstances with migration change rapidly, and in no time, migration can sneak up and find you, when serious problems can no longer be solved or prevented, ” Novaković said.

According to his statements, centralization in migration and integration is neither realistic nor a sustainable solution.

Milenko Nikić from the Serbian Ministry of Labor, said at the panel that the Serbian institutions is making great efforts to protect all those who reside in Serbia, particularly in the case of unaccompanied minors, who are increasingly entering the country, and are “needed [to be] under the watchful eyes of professionals from the system of social protection.”

“Most refugees do not see Serbia as a destination country and see every opportunity to leave the country, but there are also successful examples of integration in local communities, when it is made possible, thanks to first and foremost the openness and humane approaches of our citizens.” Nikić said.