Migrants are loosing their lives trying to reach European coast

The Italian Coast Guard on August 10th 2013 found six bodies of illegal immigrants at a beach in Sicily, which is believed to be citizens of Syria, while 100 people are rescued.

According to Italian investigators, they probably were in a group of about 120 people, including women and children, whose boat sank in an attempt to land on the Italian coast. Bodies were found by workers on the beach nearby second largest city in Sicily, Catania. Other passengers of a small fishing boat that the migrants were traveling by, they were transferred to the mainland and it is assumed that they are all Syrians. 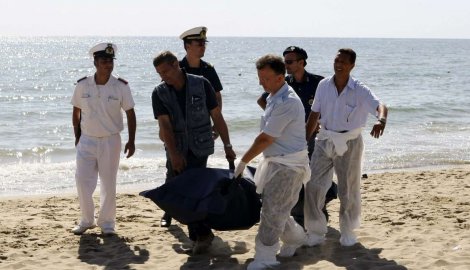 Italian media says that six migrants apparently didn’t know how to swim and they drowned trying to reach the shore, whitch was only 15 meters away from the place the ship sank.

Nearly 700 illegal immigrants just during 24 hours doked with boats on the coast of southern Italy. Most of them were Egyptians and Syrians. Only on one boat there were 176 people, including 41 women and 73 children. Each of them paid at least 2000 dollars (1500euros) to smugglers, for a two-week trip. Rescued migrants testified that two people have died in the sea. All of 176 people who were rescued by Italian Coast Guard are housed in the city Portopalo, near Syracuse. Several pregnant women have been hospitalized.

In the period from Wednesday evening to Thursday afternoon (August 7 – 8th 2013), 400 mostly African migrants were rescued from tree boats in southern Italy, mainly near the island of Lampedusa. These migrants testified that two people, including a seven-year old child, have died from the heat during the trip on the boat.

On Wednesday August 7th the group of 100 migrants who claimed that they are Syrians were rescued from a boat near the coast of Sicily and were taken to Kalabria. In this group there were 16 women and 44 children, and they said they were on the road for 2 weeks, since they left Syria.

According to data of the Agency for Refugees EU, in the first six months of 2013 approximately 7,800 illegal migrants and asylum seekers have landed on the Italian coast. The majority of them are coming from the Sub-Saharan African countries, mostly form Somalia and Eritrea. There is also a large number of them came from Syria and Egypt.

In Syria, for more than two years a bloody civil war has been happening, while in Egypt during the same period political instability has present. For these reasons there is an increasing number of migrants who decide to go on the uncertain road to Europe. Increasingly, they enter the EU terirory on ships and boats, although very often they risk their lives.