International Migrants Day, Serbia continues to be a transit country

Belgrade: International Migrants Day is celebrated around the world. Serbia is one of the so-called transit countries for immigrants on their way to the EU. 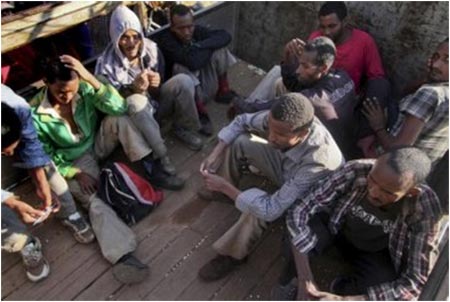 Prime Minister of Serbian Government and Minister of Interior Ivica Dačić says that over the past two decades Serbia has made great efforts to protect the rights of refugees and internaly displaced persons, and to deal with the social consequences of the waves of migrations. As addition to celebration of Migrants Day, at the conference it was also celebrated 20 years of work and existance of International Migration in Serbia (IOM). On that occasion, Dačić said that the challenges of migration waves exceeded the capacity of Serbia, and that issues could not be solved without the cooperation with international organizations dealing with migrants, refugees and displaced persons.

– In Serbia in the past 20 years we have faced all kinds of migration, except those we most want to see – that the citizens of the other countries come to our country for education and employment opportunities, said Dacic.

According to him, past two decades in Serbia were marked by forced migration and emigration of a large number of citizens to Western Europe and the United States.

Recalling the number of programs and projects that Serbia has undertaken in partnership with IOM, Dačić said that the Belgrade office of the organization assisted more than 500 victims of human trafficking, as well as a group of 233 ilegal migrants caught in Serbia without means of subsistence.

In addition, IOM has helped to care for 17,000 voluntary returnees from Serbia and Montenegro, and 56,317 refugees who decided to move abroad.
Prime Minister has expressed satisfaction for a number of programs to train police officers to prevent illegal migration, particularly human trafficking, which were carried out in collaboration with the IOM.

Radoš Đurović, executive director of the Asylum Protection Centre says that the lack of capacity for their accommodation is still one of the biggest problems in our country.

“Asylum in Serbia is still at the beginning. The entire system is not sufficiently developed. It will take a lot of work and a lot of money to invest in this system. Although we have some good news that soon there will be approved three refugee protections, it is still not enough if we consider the number of people entering and passing through our country. I think there is still a lot of work in domain concerning asylum. Due to reduced capacity, it is a major challenge how to provide accommodation for all these people, without some abuses, without someone to point the finger at these people, and that we have new problems with discrimination or xenophobia. “said Đurovic.

Đurovic said that citizens should be informed about who these people are and the dialogue should be established.

“Most people are skeptical but still without strong views. Important thing is that the government, the public sector institutions and the media convey the appropriate image to the citizens and the public on this issue. Seems to me that we are not sufficiently informed about the problem of immigration and asylum that has befallen our country”, Đurovic said.
He adds that the main problem is housing and accelerating the asylum procedure.

“Although I have to stress out that so far over 90 percent of asylum seekers do not intend to stay here so they will disappear and abandon the procedure,” said Đurovic.

Prethodno Collecting the footwear and the clothes for asylum seekers residing outside the asylum centers
Sledeće Bogovadja: From asylum to the classroom