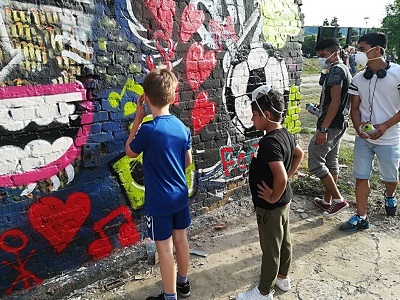 Asylum Protection Center (APC / CZA) organized a creative interactive workshop for graffiti drawing on June 17, 2018 at the Ciglana Club in Belgrade. The workshop was realized within the project LOVE (Law, Order, Value) – for migrants / asylum seekers / asylum seekers, in exercising their rights without discrimination, financed by the European Union.

Boys from Afghanistan and Iran, who live in Serbia without their parents, together with youth from the local community, the APC / CZA team, volunteers and APC / CZA students, all participated in the workshop. The special guest of the workshop was graffiti artist Bogdan Đokić and Nejib, asylum seeker – and academic painter to whom APC is assisting in the asylum procedure.

The graffiti drawing was preceded by a workshop with migrant and local children, moderated by a pedagogue and social worker from the APC team who deal with the interaction and integration of asylum seekers and refugees in Serbia. At the same workshop, the participants not only discussed what makes them happy, what challenges they encounter while traveling and staying in Serbia, but also how to express themselves and communicate with people from the local community and with their peers in the local environment in which they live.

The graffiti artist then presented them with the basics of drawing a mural, and then assisted each participant of the workshop to express himself, either together or with others through the art, and to present their work. For asylum and local children, this was a completely new experience that all young people of their age often dream about, and they were able to creatively communicate, negotiate, exchange ideas and overcome possible unknowns and preconceptions through creative work. Everyone was very excited and proud of their ability to leave some visible trace on the walls of the factory that can last and leave an impression while sending a message to all the others who will see it in the future. 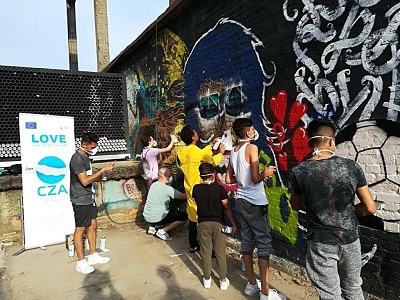