Fair of cultures in Lajkovac

The Asylum Protection Center (APC / CZA) organized a fair of cultures in Lajkovac on April 14th, 2014, as a part of the final activities of the project “Improvement of the system of asylum protection in Serbia”, financed by the European Union.

Local residents who visited the fair could taste traditional dishes and treats typical for countries of origin of asylum seekers, and to make hairstyles and draw the henna at one of the stands on the fair. Bookmarkers, the asylum stories and cups that were painted at the workshops that the Asylum Protection Center conducts in asylum centers in Serbia, were also exposed at the fair.

The fair was visited by a large number of local residents, among which children showed particular interest and took the opportunity to socialize with three young asylum seekers from the Asylum Centre in Bogovadja, who also attended the event.

Photos from the fair can be seen HERE 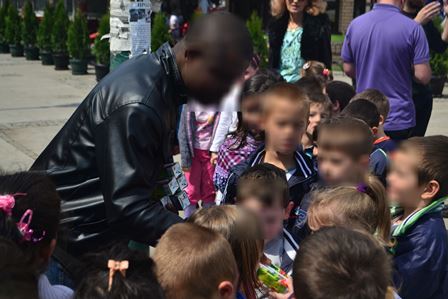