Početna / CURRENTLY / LATEST / Djilas: There no logic in making the asylum centers on the territory of Belgrade

Djilas: There no logic in making the asylum centers on the territory of Belgrade

Today Belgrade Mayor Dragan Djilas supported the citizens of Mladenovac in their efforts to not allow construction of an asylum center in their municipality, saying that the state needs to provide the specific capacities for the asylum seekers.

Djilas was on the panel in Mladenovac, at which he spoke as president of the Democratic Party and pointed out that asylum seekers need to have a place and that the government has to build special capacities for them, but they certainly should not be in Mladenovac because of the difficult economic situation, low standard of living and a large number of refugees. 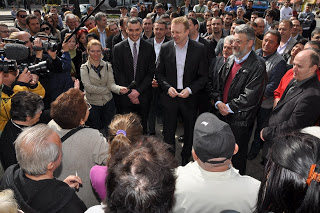 Prethodno Analysts: Regional solution is a must to curb illegal migration
Sledeće Six victims in the conflict between the Muslims and Copts in Egypt