On April 2nd, 2014 the Asylum Protection Center (APC / CZA) in cooperation with the hair salon “Gracija” organized Asylum corner in which participated asylum seekers women from Bogovodja and women from Lajkovac. Asylum seekers women originating from Sudan, Eritrea, Syria and Iraq presented the ways in which they nourish the hair and the hairstyles that are popular in African countries. Local women also had the task to present popular hairstyles in our country.

Asylum seekers women and local women had the opportunity to wash, dry, cut and style each other hair in space of the saloon which significantly contributed to the establishment of a deeper contact and connection among women born in different parts of the world.

During the encounter it was presented traditional eyebrow threading, very popular in the countries from which asylum seekers women come.

This is one of the activities that APC/CZA organizes for the purpose of establishing intercultural dialogue in places inhabited by asylum seekers.

Photos from the Asylum corner you can  here  as on the website www.azilbogovadja.rs 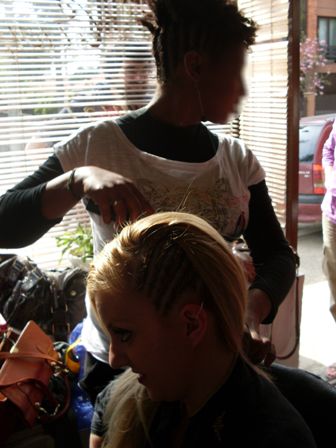